Officers of the Lagos State Police Command have apprehended two members of a notorious armed robbery gang in Lekki, on Lagos Island.

Nemesis caught up with the two criminals after they attacked two residents in the area.

A police team was on patrol around Lekki/Ikoyi bridge at about 9 pm on Saturday when they met two ladies who rushed towards their position, looking distraught.

The victims later identified themselves as Gbemi and Hannah and explained what they had encountered at the hands of the robbers.

In their narration, the robbers were said to be in possession of guns with which they used in threatening them.

Eventually, the officers were able to close in on the two criminals, Adebayo Ayomide, and Isaac David and overpower them. 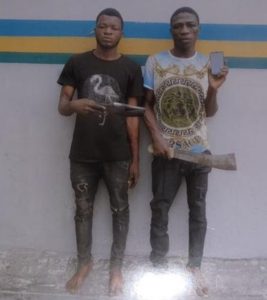 Items such as a barrel gun, a cutlass, and the ladies’ phones were found on the suspects when they were searched.

The officers retrieved the phones and took the criminals into custody thereafter.

While confessing to their crimes, Adebayo and Isaac mentioned that they were part of a group of robbers who operated regularly on the island.

The Police Commissioner in Lagos, Zubairu Muazu Mni, has since reacted to the arrest, commending the efforts that the officers put into arresting the criminals.

He ordered that the case should be moved to the Special Anti-Robbery Squad division so that further investigations can be carried out.

The Police boss further advised petty robbers to desist from the act or leave Lagos State as there is zero tolerance for such atrocities in the state.