A police officer attached to a COVID-19 isolation centre has been disarmed, arrested and quarantined after he was caught sexually assaulting a female patient.

The incident occurred in Busia county, Kenya where the police officer was caught red handed by other security agents posted to the facility on Thursday night.

He is one of three police officers and two wardens posted to the facility from Busia prison to keep Infected COVID-19 patients safe.

According to local Kenyan media, one of the officers noticed his rogue colleague engaging one of the patients on Thursday night and wasn’t comfortable about it.

See Also: Why I don’t believe in charity – Seun Kuti

He told the other security agents around about his misgivings and they decided to intervene. They however couldn’t find their colleague and the patient in question and began a manhunt for the duo.

Their search was rewarded at past midnight when patients in the female ward of the facility, flooded out complaining that one of them was being raped by a police officer. 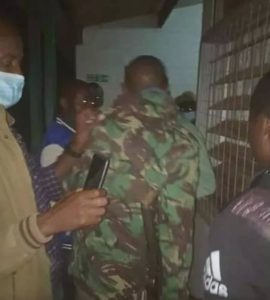 The security agents thereafter disarmed the rogue officer, and called in health workers who quarantined the police officer in the same facility.

Know about these Autoimmune Diseases

Russia Accuses US of waging Misinformation War against Coronavirus Vaccine