Northern Elders Forum, NEF, has maintained the stance of Aliko Dangote concerning the poverty level being experienced in the Northern part of Nigeria.

During a summit held in Kaduna recently, the Africa richest man had asserted that about 60 percent of Nigerians in the North were living in abject poverty; a statistics that was condemnable, partly because there were some large expanse of lands in that side of the country to farm and do other businesses that could change their living standards.

In his commentary at the event, Dangote mentioned, “In the north-western and north-eastern parts of Nigeria, more than 60 per cent of the population live in extreme poverty. It is instructive to know that the 19 northern states which account for over 54 percent of the country’s population and 70 percent of its landmass collectively generated only 21 percent of the total sub-national Internally Generated Revenue in 2017.

“Northern Nigeria will continue to fall behind if the respective state governments do not move to close the development gap.”

Although some criticized him for making such assertions, the Chairman of NEF has now reiterated that Dangote got everything right. 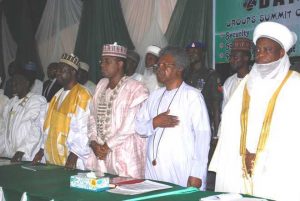 Professor Ango Abdullahi explained that he and other elders in the forum believe that insecurity and poverty crises in the north are direct results of failed governance at the state level.

He stated, “We fully endorsed Dangote’s observations. Of course, you don’t need to go anywhere to search for the existence of abject poverty in this country, particularly in the northern part of Nigeria.

“But then, where do you put claims of responsibility? Our position like Aliko Dangote’s is that there is irresponsibility of governance, especially in the North.

“I think this is consistent with what we said in one of our meetings in Kaduna where NEF and other groups issued a communique which indicted both the state and federal governments and even indicted political leaders in their roles and responsibilities, including the legislative and executive branches, for not doing enough to deal with the challenges of poverty and underdevelopment in northern Nigeria.

“We even went on to warn them (governors and political leaders of northern extraction) that we are going to alert our people not to elect them in the recently concluded elections because of their inability to do those things that they were elected to do.

“We completely agree with Dangote that poverty is here (North). Of course, my take is that leadership has failed at governance level, particularly at the state and local government levels.”

He subsequently advised that if the region was to come out of the crisis, then attention should be placed on agriculture.

Abdulahi said, “But then, how do you challenge the poverty situation of the country and northern Nigeria? “If you develop agriculture which employs between 60 percent and 70 percent of the entire labour force in the country, that will keep the rural population busy and productive. Once you are productive, you will escape from poverty and you will be taking a lot of people out of poverty.”

Non-remittance of pension contributions should be criminalized – NLC