For the crimes of swagger jacking, copyright infringement and false impersonation, the Cartoon Network has sued Senator Dino Melaye (APC Kogi) for the sum of $10 million, while Disney and Haim Saban also slapped the flamboyant, braggadacio Senator with similar sum for breaching its copyrights to the popular Power Rangers television production, and impersonating its red ranger in Washington DC.

Dino Melaye who as a Nigerian Senator has an annual salary that is more than double that of the United States President’s has far less decisions to make for far less people and is certainly overpaid and under-worked. The Senator spends his days deciding which Ferrari to cruise and which horrendous outfit to rock to one of his babymama’s apartments.

Speaking to FN correspondent by telephone, Handrew Weinerstein, a representative for the Cartoon Network said, “Johnny (Bravo) is one of our oldest brands. We were surprised when we received a call from Google telling us someone was making money from our trademark in Nigeria and wanted to ensure it was not a scam.

“Well our Digital Marketing team discovered that someone was indeed using our copyright to run scams via the Google search engine. Apparently there is a man there who when you search power rangers his photo comes up. Psychologists are looking into it as it seems he may be in the middle of a mid-life crisis and is advertising his single nature to potential mates..”

Pressed further the Cartoon Network rep disclosed, “Where Melaye goofed was in using our character’s patented brand. Everybody knows the secret sauce of Johnny Bravo is that he always skips leg day. Senator Melaye, likewise, has never done a leg day in his life if you study the photos closely.

FN was also able to reach out to the Red Power Ranger star, Jason Scott, “Wow. I don’t know who that guy is but he did a great imitation. He should ask for permission and he needs to invest in more important things than cars. He needs to find his soul and some time in the gym to work his legs. His legs look awful. I am just suing him because I had to look at those images. I cannot unsee them now.

FN was unable to reach Dino Melaye who was unavailable as he was having a strategic meeting with his bank via Whatsapp call on which Mastercard card(s) to use in order to fully shut down the skinny jeans stores at the Mall of America, in downtown Virginia, later today in order to fully turn up as per TGIF. 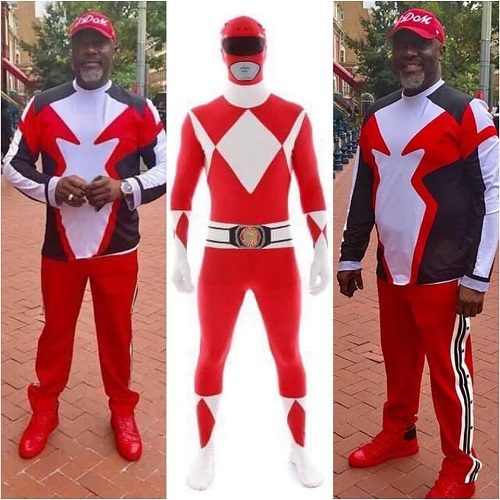 A colleague of Dino’s in the senator said, “Dino Melaye doesn’t have the common sense he requires. If he were to be a sharp guy, he will not be exposing all the money we are making here in the Senate. He is exposing us to Nigerians on Instagram and Facebook, and now he has become a meme legend. Honestly he needs to diet, he is as big as two or three Northern Nigerians.”

Actress, Lala Akindoju Celebrates Her Husband On His Birthday