President Buhari visited Zamfara state to inaugurate some roads and other works in the state. In doing this, he was dressed in a military outfit.

His fashion statement caused a stir online as many compared to something similar to what Goodluck Jonathan did during his tenure.

Many have come out to compare the two looks on the two presidents, but Deji Adeyanju who is the director of the PDP’s new media took it to new heights when he said on his Twitter page: “Too much of imitation is bad” referring to Buhari and his military outfit.

The Digital Strategy and Engagement Unit in President Buhari’s office saw this and got right back at the PDP advocate saying, “At least Boko Haram can spot the difference”.

You can see the initial tweet and the reply below. 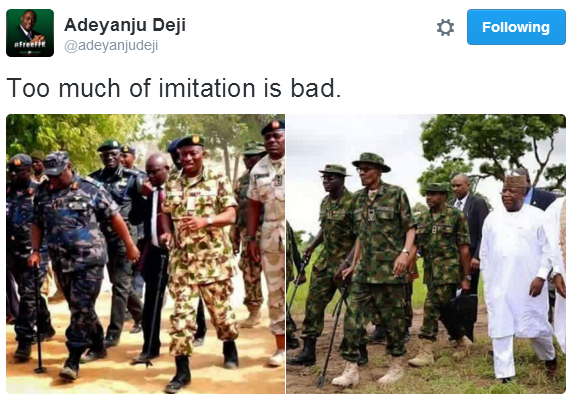 This Was What Happened When I Phoned Buhari – Fayose Reveals