Former Barcelona FC player, Neymar Jnr.’s exit from the club remains fresh in the minds of the Spanish football league fans as he made a whopping record move of £200million which not only met his release clause but was enough to buy him over to the French side, Paris St-Germain where he will be earning £26m after tax for five years.

However, his move came in with a significant revelation of how the football youngster came to clinch an endorsement deal after lavishing $180,000 on watches and accessories at a GaGá Milano boutique in Tokyo.

The Brazilian footballer according to GaGá Milano caught the eyes of staff at the boutique when he walked in and spent the whooping sum enough to establish that he is a fan of the designer.

The designer who saw an avenue went in for the kill by signing an endorsement deal with the footballer and producing 500 copies of the Neymar Jr. Limited Edition from GaGá Milano watches. 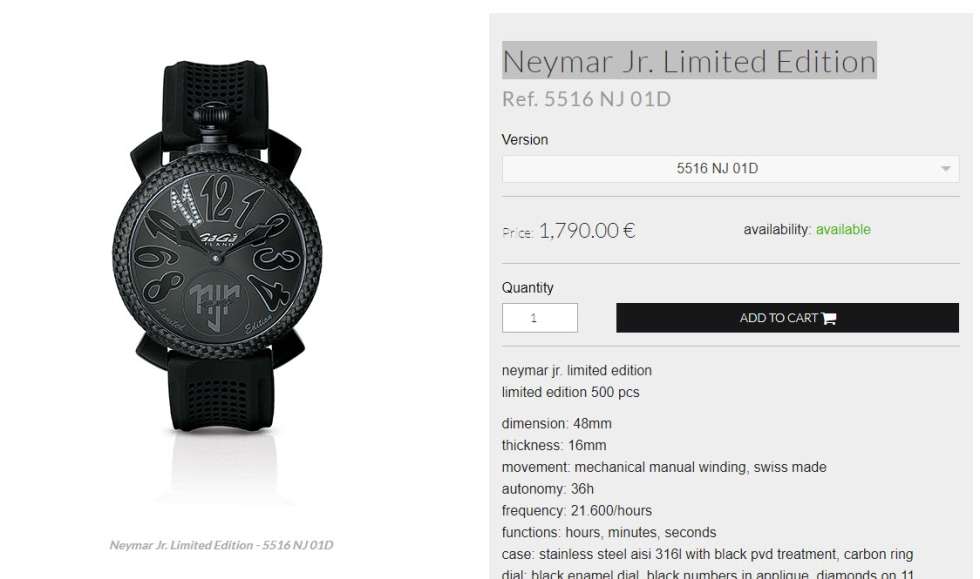 Although, the watch priced at $2,100 is not as expensive as the Richard Mille timepiece worn by Tennis legend, Rafael Nadal, estimated at $775,000, Neymar is proud of his own line of watches as he was seen at the announcement of the world-record transfer clad in a classic black suit and of course, the Limited edition Neymar Jnr. timepiece.

GaGá Milano while describing the reaction of staff at the Tokyo boutique when the footballer walked in prior to the World Cup in 2014 and splashed $180,000 on 16 watches and some accessories said: “the entire staff [was] in awe.”

The line of watch and announcement as a brand ambassador came earlier this year prior to the world record move by the star.

GaGá Milano however added a little bit of style to Neymar’s watch as the designer covered the No. 11 in diamond which signifies the number he wore at Barcelona although Neymar has picked the Number 10 jersey at his new club, PSG to match that of his national jersey.