Early Monday morning, Rome was hit by a mild earthquake, just as the city seeks to readjust to life amid the coronavirus lockdown.

The earthquake which measured a 3.3 magnitude struck at 5.03am with its epicentre at a small town called Fonte Nuova, around 10 miles outside the capital.

According to Firefighters in the city,  numerous phone calls had been received from people who had been shaken awake to make inquiries. However, there were no reports of damage or injuries.

Residents reported hearing a loud thundering noise for around 30 seconds just before the vibrations started, sending people running into the streets. 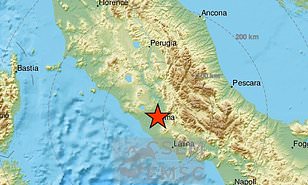 ‘People woke up, screams of fright were heard from our building,’ an eye witness identified.

‘You could see the apartment lights coming on one after the other.’