R.Kelly Charged With Bribing Official To Obtain Fake ID To Marry Aaliyah In 1994

American Singer R. Kelly has been charged with bribing a government official to get a fake ID in order to marry 15-year old singer Aaliyah.

According to court documents, A grand jury charged Kelly with bribing an Illinois official to produce “a fraudulent identification document for Jane Doe #1″ on Aug. 30, 1994. A person familiar with the matter confirmed that the Jane Doe referenced in the statement was Singer Aaliyah and at that time, Aaliyah was 15 years old.

The marriage license listed her age as 18, the state’s minimum age requirement to marry without parental consent.

In the past, Kelly’s representatives have denied that he knew Aaliyah was underage at the time they were married.

The new charge is an addition to a series of federal indictments filed against singer R.Kelly, who is accused of abusing girls and women for more than two decades, including kidnapping, forced labor and sending child pornography across state lines.

“To think that the Federal Government has nothing better to do then go back 25 years and address a ‘fake ID’ charge makes their whole case weaker,” Anton told NBC News. 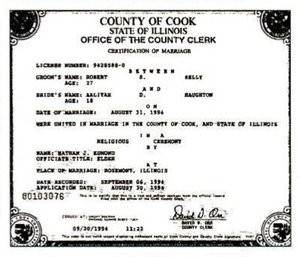 ICPC, Others Urges Nigerians to Fight Against Corruption for Better Society