A video has gone viral showing the moment a white woman called 911, falsely accusing a black man of threatening her life.

Earlier on, a Caucasian woman identified as Amy Cooper was captured on camera making a 911 call, falsely accusing a black man of harassing her.

The woman was at the famous Ramble in New York’s Central Park when she took her dog off the leash, an act that is clearly against the rules so as to protect the birds from dogs.

In the video, the man identified as Christian Cooper politely asked Amy to put her dog back on the leash, which she refused.

When the man began filming her, she confronted him and asked him to stop. Cooper told her he would stop when she complies and puts her dog back on the leash.

Amy took offense to Coopers request as she demanded he stop filming unless she will call the police claiming that an African American man is harassing her.

She said: “I’m going to tell them that there’s an African American man threatening my life.”

Amy immediately pulled out her phone and began dialing 911. She brought up the man’s race several times as she called the police on Monday May 25. She falsely claimed that the “African American” man was threatening her in the video.

The video has been viewed by millions, sparking outrage that the woman would falsely accuse a black man of threatening her life. Twitter users reacted to the video in outrage and called for Amy Cooper to be arrested for making an unnecessary 911 call.

Internet users immediately gathered information on Amy and it was soon discovered that she works with Franklin Templeton. 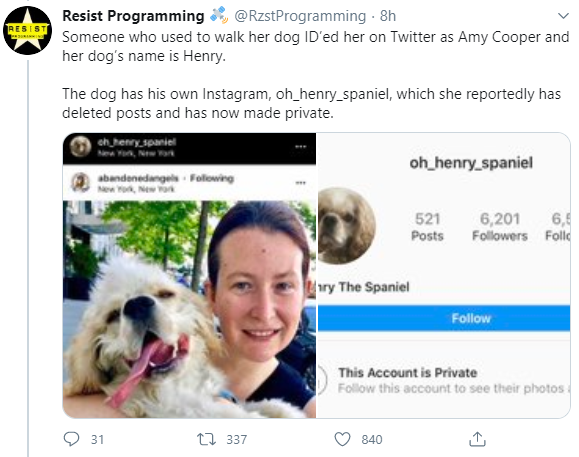 Her LinkedIn bio shows that she’s the “Head of Insurance Investment Solutions at Franklin Templeton.” 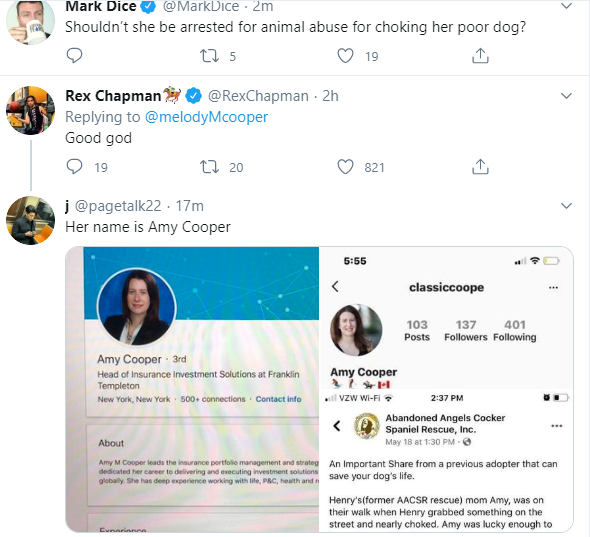 Following the whole scandal, Franklin Templeton responded to the whole drama with an official tweet.
They tweeted: “We take these matters very seriously, and we do not condone racism of any kind. While we are in the process of investigating the situation, the employee involved has been put on administrative leave.”

Meanwhile, people have continued to call for the arrest of Amy Cooper for making an unnecessary 911 call, lying to cops, endangering a black man’s life, and choking her dog.

Pet Parrot May Give Evidence in Owners Rape Case