At least 15 women have accused U.S. rapper T.I. and his wife Tameka “Tiny” Harris of drugging and sex trafficking them.

On Thursday, January 28, Sabrina posted on her Instagram Story messages which she received from the alleged abuse victims.

The women also went on Instagram Live with Sabrina Peterson to share their extremely detailed and shocking stories about alllegedly being drugged and abused by either the Harris’ or associates of their’s, with the ”couple’s knowledge.”

In the screenshots shared by Peterson, different women have claimed T.I. refers to women as “cattle. They also claimed Tiny is the “ringleader, a worse abuser than Tip (T.I.).”

The women also claim to have seen Tiny consume cocaine and molly. They said she forced them and her own friends to consume drugs before entering their home.

One person detailed an alleged incident that took place during CIAA in Charlotte in 2016. She said her phone was confiscated when she went to T.I. and Tiny’s hotel suite at the Ritz-Carlton. Molly and cocaine were reportedly handed out at the party and only guests who removed their pants were allowed to stay.

“I watched him drag girls back and forth from the bedroom, to the bathroom, to the living room,” she wrote. “One girl was crying because she wanted to leave but they refused to give her her phone to call an Uber.”

The woman, who said she was excused from the activities because she knew someone in T.I.’s entourage, added that she witnessed the rapper tell his security to come “pick this b***h up off the bed” because she couldn’t walk. The alleged victim was “almost unconscious” and her pulse was “barely there,” according to the witness.

Based on her own experience, the anonymous source described T.I. as an “absolute monster who uses money and power to manipulate people and Tiny is his secret weapon.”

Read also: Outrage As Man Recalls His Rape Experience By An Older Lady

Another alleged victim, who claimed she was a minor when the abuse happened, said she and her friend were “pressured for sex” during 2005 NBA All-Star Weekend in Colorado. Another woman said the “girls were so high it seemed like they were dead.”

T.I. has not yet responded to any of the claims.

See their statements below: 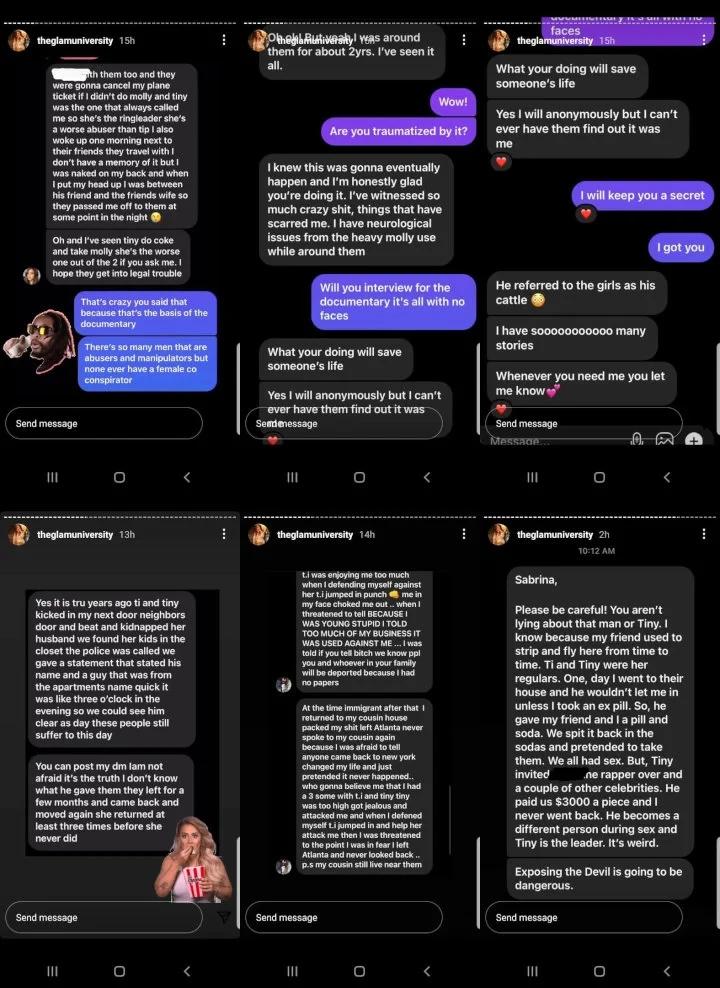