Reactions as Liverpool and Chelsea drop points in UCL

In the wake of matchday one which saw Liverpool and Chelsea lost their opening games, Managers, players and fans react.

Speaking to BT Sport, Liverpool captain Jordan Henderson had this to say on Napoli’s first goal which was expertly converted by Mertens, said;

“It should hurt because there were opportunities for us. It was an open game with a lot of counter attacks, but we didn’t finish them off and that is a problem.

“I don’t think it’s a penalty. What can I say, for me, it is clear and obvious no penalty. He jumps before any contact, we can’t change that.

“We played a lot of good football but didn’t finish it off. We controlled moments but had not enough chances in the end. We made decisions that were not right and have to accept the result. It was very often the final ball that was not right.”

Virgil van Dijk got caught trying to overplay for the second goal. Liverpool were trying to force the game but it was sloppy and he misplaced his pass to Andrew Robertson.

Meanwhile, Rob Green, Queens Park Rangers goalkeeper speaking with BBC Radio 5 live about Ross Barkley’s missed penalty in a tie which saw the Blues’ beaten at home when they could have at least earned a draw, thinks Jorginho should have taken the penalty.

Ross [Barkley] was on the bench and there should have been a designated penalty taker who started the game. If it had happened in the fifth minute, I assume it would have been Jorginho to take it. 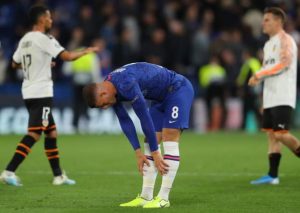 Ross had the confidence to take it but unfortunately, it didn’t pay off and I don’t know if there will be a conversation in the dressing room after the game.

“It is hard to take because through the game we had better chances and controlled the game. It is the Champions League and it can be decided in small details. They score a goal and we could not convert our chances.

“Ross (Barkley) is one of the best penalty takers in the team and one who takes them. He had the confidence and he was unlucky hitting the bar. They [the other players around him] were encouraging him to have the confidence to score. There was high expectation. They were trying to get him into the best condition. Hopefully next time it goes in.

“We are trying to build something special. We have a young squad. But we need to get results straight away. It is a lesson we have to learn as a team. We still have five games to qualify.”