Aminat Sule, Personal Assistant to former Nigerian President, Olusegun Obasanjo has narrated the event that led to her emergence as Obasanjo’s P.A. 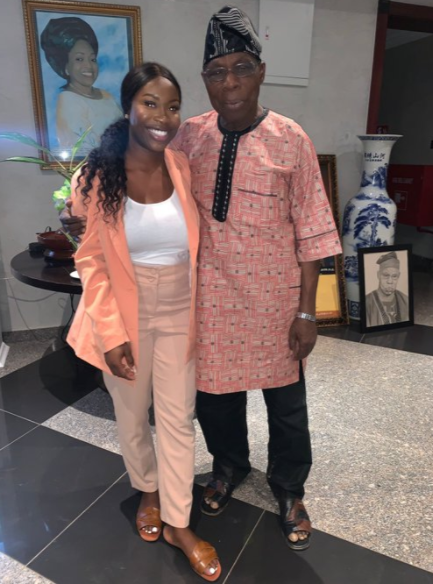 Aminat who disclosed her long-term goal was to become Minister of Foreign Affairs in the nearest future said she has always positioned herself in places where she could network with people in power.

She revealed she attended an occasion hosted by Chatam’s house when she learned Obasanjo would be there. Her zeal and passion made her sit in the front row, occupying the seat reserved for a Journalist who was running late. 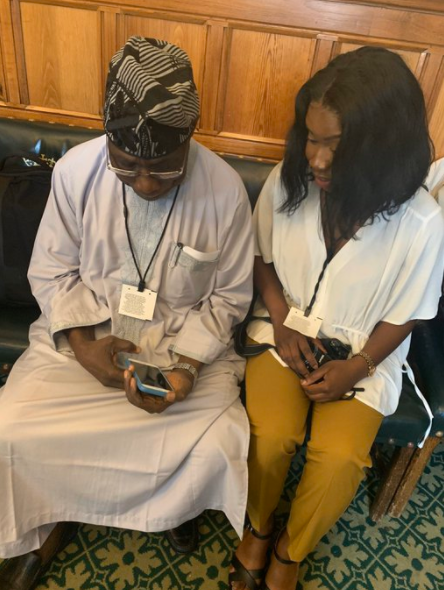 According to Aminat, she made eye contact with the former President several times in order to catch his attention.

Shortly after the event ended, attendees jostled to take pictures with Obasanjo, Aminat Sule seized the moment to storm the stage as she politely told guests the former President will be taking a 10 minutes break and will no longer be available for pictures. She asked organisers to prepare a private room and bottle of water for him.

When they got to the room, the former President questioned her and asked the identity of her parents. “Whose daughter are you?”

She told him her parents were normal Nigerian citizens who relocated to UK for greener pastures.

“My father isn’t anyone you know. He’s Just a normal Nigerian citizen who relocated to the UK for a better life.” replied Aminat

He chuckled and said “so, how can I help you?” Aminat said “Well, I’m your new PA. I’m going to serve you” and  I’ve been serving him since that date.

Concluding her story, Obasanjo’s self-appointed PA wrote: “Moral of the story: Opportunities don’t always come to you. Sometimes you have to create your own opportunities.”