The National Youth Service Corps (NYSC) members are often redeployed to their home states on health grounds or issues of national security as is often the case with intending corps members posted to Borno state.

However, in more hilarious twist to attempts of parents to influence the redeployment of their children, one Mrs Uwakwe Theresa has written to the National Youths Service Corps for the redeployment of her son, Chijioke Kingsley Nnamdi, stating that he suffers from spiritual attack called ‘Ogugu.’

Chijioke was posted to Yobe state for his national service. Theresa’s letter implores the NYSC scheme to redeploy his son back home so he can be attended to by his exorcist/prophet.

READ ALSO :Breast cancer has nothing to do with spiritual attack, governor’s wife tells women

She explained that Chijioke’s case is not a medical condition and added that administering any form of orthodox medicines when he is under the attack would trigger a regretful outcome or at worse, end his life.

She went on to explain that what is behind her son’s condition is very mystical.

See the picture of the letter below, 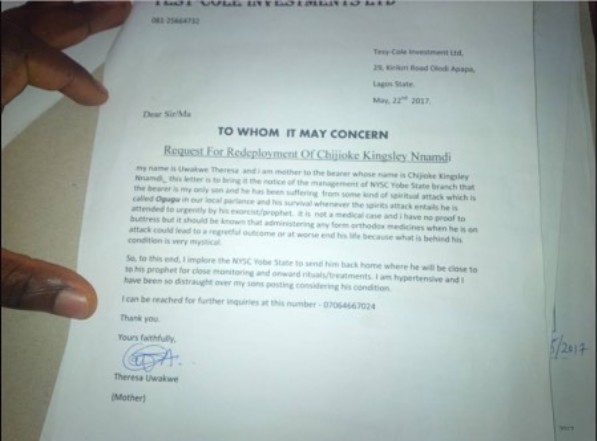 ‘Do you have any idea what Professionalism is? – Actress Bimbo Akintola slams those who called her out for putting work before Moji Olaiya’s burial

“My husband lied about imprisonment, separate us” – Wife tells…