The names and portfolios of some of the aides of Vice President, Yemi Osinbajo, who were sacked by President Muhammadu Buhari have been revealed by Daily Trust.

The Herald earlier reported that President Buhari approved the dismissal of some of his aides who were attached to the office of the vice-president.

The Newspaper disclosed that Prominent on the list of the affected aides is Ajibola Ajayi, the daughter of former governor of Oyo state, Isiaka Abiola Ajimobi. She was appointed Special Assistant, Legal to the President (VP’s office) in August 2019.

She was a former SA to the President on Bureau of Public Enterprises, BPE (VP’s office) from October 2015 to May 2019. 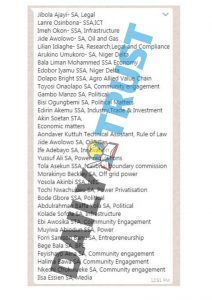 Meanwhile, The Herald reported that

Sequel to President Muhammadu Buhari’s approval of the appointment of the Special Adviser to the government on Finance and Economy,  the president has also approved the dismissal of 35 aides from the office of the Vice President, Yemi Osinbajo.

This was reported by Daily Nigerian News, in its  publication on Wednesday.

The aides were initially posted to line ministries last month, an orchestrated plan to deny them access to the villa, a move in anticipation of their dismissal and also a move made to cut on the level of influence of the Vice President, Yemi Osinbajo.

It was said: “Although more than half of the aides are under the payroll of donor agencies, the cabal eased them out in order to whittle down the influence of the vice president,” said a source familiar with the development.”

How Osinbajo’s security aides beat up journalist at Aso Rock

Buba Galadima: “APC and PDP are one and the same party”