Revealed: Wendy Williams to know all her husband’s sexcapades by divorcing him

A few weeks back, Wendy Williams resumed the airing of her show, after she suffered from a mental break down on Live TV and had to take some time off.

During the period, there were reports that the popular show host was battling with drug abuse which was as a result of the marital issues she had with her husband, Hunter.

However, Wendy refuted such claims when she got back on her show, choosing to only discuss how she was abusing some substances.

She managed to act like everything was fine with her again, especially whenever she was being filmed.  But rumors continue to fly around that her marital life was in shambles.

According to a source, Wendy’s health relapsed when she heard the news that her husband’s lover had given birth to his child.

The news reportedly forced her to check into a hospital but Wendy has not confirmed all of that.

After then, she had hardly been out with her husband, and on some occasions, she moved around without wearing her ring; an indication that there is trouble in paradise.

Some sources have also stated that Wendy has been considering a divorce from her cheating husband. 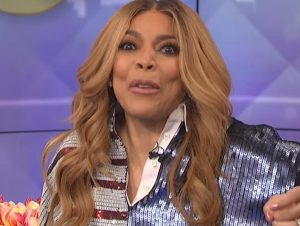 Page Six explained that if the partners eventually get divorced and go on their separate ways, Wendy will most likely discover the amount of money that Hunter has been spending on extramarital affairs which he is said to have been involved in for more than 10 years.

However, she may be a huge benefactor of the settlements involved, especially if the amount Hunter has spent for such purposes is huge.  ⠀⠀⠀⠀⠀⠀⠀

Reacting to the possibilities that may arise in the course of their divorce proceedings, a popular divorce lawyer stated, “If Kevin (Hunter) is this baby’s father, it affects things.

“If he spent a lot of money on this woman, a judge can concede that’s a wasteful dissipation (spending marital funds in a frivolous manner).
“One would likely buy the other out as part of a divorce settlement,”

Patience Ozokwor Rejoice’s Over Amazing Birthday Gift From Her Children