‘Rig and be roasted’: PDP calls for arrest of Tinubu 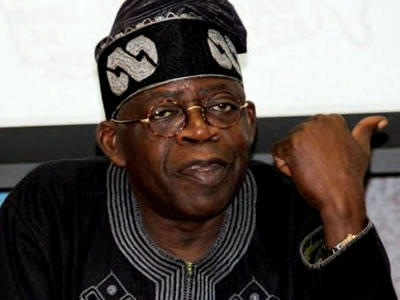 The Lagos chapter of the Peoples Democratic Party has called for the arrest of APC National leader, Asiwaju Bola Ahmed Tinubu.

The PDP made the call in a statement issued yesterday by its spokesman, Taofik Gani.

The statement said, “Bola Tinubu had stated publicly that in the coming elections at Ekiti and Osun states, anyone who attempts to rig will be murdered and roasted. The statement was made at LAUTECH, Ogbomosho, during the investiture of the APC National leader as Chancellor of the higher institution”.

The PDP claimed the statement was criminal and had PDP members as targets, thus “the Security Agencies must therefore act fast to prove that they are on top of security issues in the land”.

“The Lagos State PDP has also consequently tasked the Security Agencies to interrogate Bola Tinubu on all the murders and maiming that took place during the period of ACN’s desperation to reclaim Ekiti and Osun States from PDP”.??

“We are indeed worried that such inflammatory, inciting and criminal pronouncements can be made in our country at this period that we are confronted with serious security problems in some parts of the country”.

“This careless statement by Tinubu must not be treated with kid glove. He is a man with crude followership in the South West. He is thus potent enough to ignite conflagration in the region. It is also possible that the APC leader has an already prepared target list and will use the elections as decoy to hit his targets”.

“We recall well that a similar careless statement made by a Presidential Candidate, who is also a member of APC is believed to have also aggravated the violence in the North. The situation in the north may not have been this bad if the Security Agencies had acted fast. Hence, this current agent provocateur must be swiftly curtailed. The security agencies, especially SSS must not be cowed by his over bloated status, but arrest him and even prosecute him,” Lagos PDP stated.

Nigeria peaceful in spite of pockets of insecurity — Gov. Bagudu