The  Rivers State Police Commissioner, has redeemed his promise to gift N1million to whoever could lead to the re-arrest of Ifeanyi Dike, an undergraduate who allegedly raped, killed and removed vital organs of an eight-year-old girl.

The suspect who was apprehended after the deceased was found with him, managed to escape from the police station after his handcuffs were removed so he could write a statement.

The Nigerian police thereafter declared him wanted with a bounty of one million naira.

Dike, was rearrested in Jos, Plateau State capital, by security operatives, and was immediately brought to Port Harcourt, Rivers State.

JohnBosco, the divisional police officer in Rivers State was dismissed and arrested on the orders of the State Police command for his alleged involvement in the suspect’s escape.

Below is the picture of the man who raised the alarm that lead to his rearrest receive his cash gift. 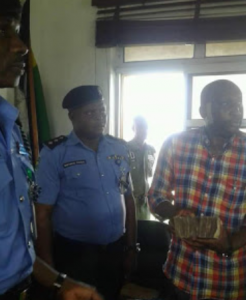