Legendary filmmaker, Tunde Kelani has lauded the Babajide Sanwo-Olu administration for inaugurating the nine-member committee led by ace actor, Richard Mofe-Damijo aka RMD to boost the entertainment and tourism sector in Lagos state.

Sharing photos of the inauguration that took place on May 5 on Instagram on Sunday, Kelani, who is a member of the committee, said that the state got it right with the initiative.

Kelani whose notable and exemplary works include Saworoide, Oleku, Agogo Eewo noted that the launching of the committee could not have come at a better time, adding that he felt honored to have been named alongside other high achievers in the industry.

He wrote, “The Inauguration and launching of the Lagos State Movie Screening Committee on May 5, 2021, by Governor Babajide Sanwo-Olu could not have come at a better time. 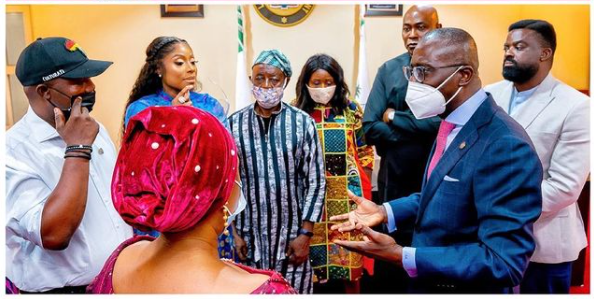 “Our nascent film industry has always needed infrastructural and funding support to make it sustainable.

“The Empowerment Project will no doubt stimulate and enhance productivity in creating more contents for the cinema and other platforms by producers and stakeholders in Lagos State.

“As a member of the Board, my colleagues and I are honored and proud to be associated with this forward-looking project by Lagos State, the undisputed primary entertainment hub in Africa.”

The Herald can report that besides RMD, other members of the committee from the entertainment industry include: Tunde Kelani, Mo Abudu, Kunle Afolayan, and Peace Anyim-Osigwe; while government representatives in the committee are Adebukola Agbaminoja, Ferdinand Tinubu, Taju Olajumoke and Mrs. Funke Avoseh.