The versatile defender has penned a three-year contract which will see him remain with the Railwaymen until the end of the 2020-2021 season.

Idowu says he’s delighted to join Lokomotiv Moscow, adding that he watched the team play in the Champions League.

He told the club’s official website : ”I am very glad to switch to Lokomotiv. I’m really looking forward to joining the team at the training camp. 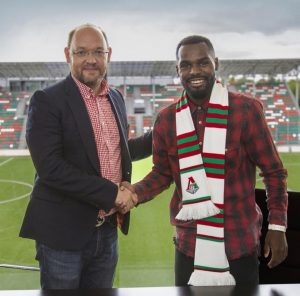 ”In childhood I watched the matches of Loco in the Champions League – against Real and Inter. The whole country was proud of the team!

”I am well acquainted with Aleksandr Kolomeytsev, we played together in Perm, I know the rest of the guys from the matches between Amkar Perm and Lokomotiv Moscow.”

Though Idowu was born in Saint Petersburg, Russia, he will be registered as a foreign player by Lokomotiv Moscow after making his competitive debut for Nigeria at the ongoing World Cup.

He became clubless after Amkar Perm were relegated to the third division due to financial impropriety and Lokomotiv Moscow were quick to swoop in and sign him on a free transfer.