Injured Liverpool forward Mohamed Salah has given a statement concerning his participation at the upcoming World Cup games.

The 25-year-old Egyptian was wrestled to the ground by Real Madrid captain, Sergio Ramos in the 26th minute of Saturday’s UEFA Champions League final and was substituted in the 31st minute of the game.

On his official Facebook page, he posted a photo of his exit from the UCL final match and wrote a statement concerning the World Cup games in Russia. 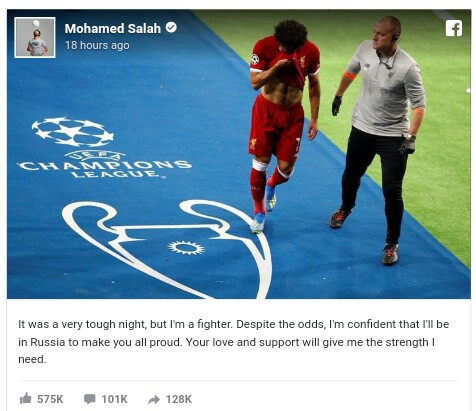 It was a very tough night, but I’m a fighter. Despite the odds, I’m confident that I’ll be in Russia to make you all proud. Your love and support will give me the strength I need.

More than 170,000 petitions have been signed by fans demanding punishment for Ramos for the tackle on Salah.