Celebrity restaurant owner, Salt Bae has been banned from attending the US Open Cup final after his embarrassing antics at the World Cup final in Qatar on December 18.

Salt Bae, whose real name is Nusret Gökçe, was the cynosure of all eyes on Sunday as he was pictured grabbing at the World Cup gold trophy as Argentine players and their families celebrated winning the highly-coveted trophy for the first time in 36 years.

Apparently to avoid a repeat of this situation at the 2023 final of the US Open Cup, which is a knockout cup competition in men’s soccer in the United States of America, the organizers announced they were banning him from the event.

Taking to Twitter on Tuesday, the organizers said, “Salt Bae is hereby banned from the 2023 U.S. Open Cup Final,”

Salt Bae is hereby banned from the 2023 @opencup Final

Salt Bae had been pictured making a surprising appearance on the pitch as the Lionel Messi-inspired team celebrated beating defending champions, France to clinch the World Cup trophy in Qatar on Sunday.

The celebrity chef could be seen effusively kissing the trophy as some of the winning players looked on bewildered. 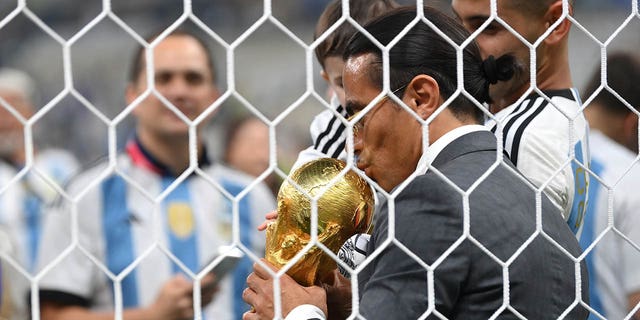 He also got close to some of the players, including captain, Messi.

World soccer governing body, FIFA, announced Thursday it was launching an investigation into the incident.

“Following a review, FIFA has been establishing how individuals gained undue access to the pitch after the closing ceremony at Lusail stadium on 18 December. The appropriate internal action will be taken,” read a FIFA statement.

Anthony Joshua’s career over if he loses April fight – Hearn