At first watch, the ad seems to be a catchy and chic promotion for the latest Samsung Galaxy Z Flip 3 5G phone… But they had turned off the comments and the quoted replies are filled with enraged “tweeps”. There is apparently a lot to unpack from this singular ad.

First, it’s the supposed cancellation of the lead choreographer and star of the ad, Todrick.

He has been accused of not paying his dancers and several other offences, some of them sexual. Consequently, he was declared “cancelled” by the jury of social media.

One user asked “why pick someone that most straight people and gays dislike to endorse your new product? Who is your target audience?” That is, of course, a perfectly reasonable question. 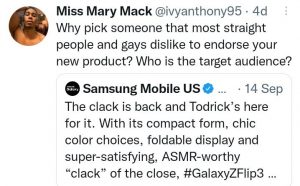 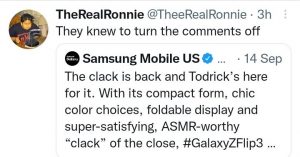 Part of the outrage is also attributed to the fact that Todrick is part of the LGBTQ community. There will always be the group of people who have taken it upon themselves to be the custodians of 21st century moral standards. They believe that the LGBTQ representation in current media is too much and therefore feel obligated to antagonise as much as they can. 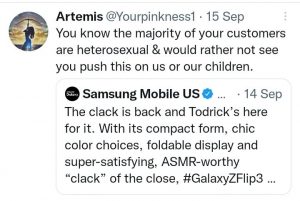 Surprisingly, some people seem to love the ad. Which is understandable, because apparently, if you take away the fact that Todrick is LGBTQ, and the fact that he’s cancelled, it’s a pretty brilliant ad. 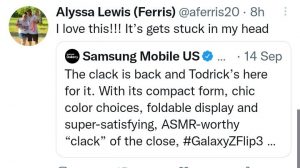 Samsung’s choice of influencer and decision to turn off the comments does beg the question; are they being deliberately controversial? Or was turning off the comments just a failed attempt at damage control for making an unpopular choice? Either way, they got some of what they wanted- attention. People are paying attention to them and negative or not, what’s that thing they say about publicity?