Nigeria’s Sand Eagles beat Egypt in an entertaining semi-final match on Wednesday. The match which was played at the Laguna Vista Stadium ended at 7-6.  The win then means they have now qualified for the worldwide competition that is set to hold next year. 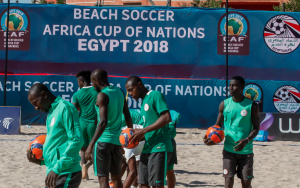 Abu Azeez was Nigeria’s star player in the match as he scored four good goals.

The Sand Eagles were up to a positive start as they found the back of the net twice through Azeez and Taiwo. Although, the Egyptians responded with a goal some moments later.

After the break, Sand Eagles continued to dominate proceedings in the match. Emeka Ogbonna and Azeez proved to be the difference on different occasions as Azeez scores again. But the Egyptians equally tried to pull themselves level in the game by reducing the deficit to one.

They threw everything they had at the Nigerian defense and eventually got their leveler. However, when it appeared the game will be settled after extra time, Ogbonna scored the winning goal.

Having qualified for the competition’s (Africa Beach Soccer Cup of Nations) final game, Nigeria will now play the winner of the match between Morroco and Senegal.

Whether or not they win the final match, the Sand Eagles have already won themselves a place in the 2019 FIFA Beach Soccer in Paraguay.

Real Madrid Suffer Their Worst Defeat in Years Against CSKA

Dortmund Finishes Ahead of Atletico Madrid in Group A