After his outrage on Saturday over the lackluster display of Chelsea players in the match against Arsenal, Chelsea’s manager, Maurizio Sarri has stated that he is not bothered by the “player power” that may exist in the team. Sarri explained that he doesn’t feel there is a potential problem because he commented negatively on their performances in the match. He equally mentioned that if a conflict arises as a result of his words, he is ready to face it, since he only wants a change in character, a new approach for the players, and overall improvement. 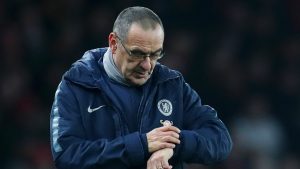 Sarri said, “I don’t know. It is my character, though,” Sarri told reporters at the Emirates Stadium. “I don’t think it is risky. These guys have a sensible head on their shoulders, so I don’t think I am risking anything.

“I said the players are difficult to motivate but by the same token, there are players who are sensible, who will listen and won’t take it the wrong way. There might be a slight risk, but I don’t think there is. This is my character – I am a straight-talker.

“This is how I speak. Yes, sometimes when you speak in that way it might cause some upset or some conflict, but it doesn’t cause any lingering bitterness. I think we probably do.

“I think we might even have someone who is capable of embodying the characteristics I have talked about. Of course, there is always a danger a leader emerges who is a bad leader – who doesn’t necessarily do the kind of things that I want the team to do.

“Nevertheless I do think we need to change the mentality and I do think within the group of players we do have that ability and the characteristics to change.”

The Chelsea manager also weighed on the fact that his predecessor, Antonio Conte, was sacked fro falling out with many players, on and off the pitch.  He insisted that his team is different and he hopes they do things differently under him.

He narrated, “I can’t remember exactly what happened,” Sarri added. “But with my team, I think it is different because with Conte at the time was using a three-man defense and changed to a four-man defense. But he was used to doing that anyway, so it wasn’t quite the same, whereas this is the football I have.

“I am a good teacher of this football. I don’t think it would be a good idea if I try to teach my players a different type of football. There will be some changes perhaps but there will be no massive upheaval.

“When I came here certainly I realized the group had a huge amount of potential. There is no doubt about that. I don’t think it would be correct for me to talk about being disappointed with what I found when I arrived.

“When I arrived, of course, I knew the team was coming off the back of a pretty disappointing season. Over the last couple of years, they have a lost some really important points of reference for the club. But certainly, the team has a lot of potentials.”

Sarri completed his address explaining that everyone in the team needs to be united.

He said, “Nevertheless I am demanding in the sense that we need to have the right attitude and approach and we need to be able to show exactly the same or even better level of determination than our opponents.”

“Till today, I use Uber”- Mr. Eazi reveals, says he doesn’t see need to own car

Igbos unite abroad but fight each other at home – Prof Folarin