Just as the dust of the #SaveMayowa scandal is beginning to settle down, a new situation might just be rearing its head.

According to On Air Personality Freeze, Mayowa, the woman diagnosed with cancer is still in Lagos.

A short while ago a scandal had rocked the entire country when it was claimed that the family of Mayowa behind the #SaveMayowa campaign were defrauding Nigerians.

It was claimed that while Mayowa was indeed sick, she was already too far gone and that the family knew this. This caused investigations and questions, but as time went on the story only became more and more convoluted.

It seems that Mayowa’s family were telling the truth and there had been a mixup of information and knowledge among those involved.

But now according to an Instagram post by Freeze, he says that Mayowa is still allegedly in Lagos even after approximately 4 times the amount needed for her trip and expenses has been raised.

Freeze asked on his Instagram why she was still around and not in the United states even after the money had been raise and also why the story was not out there for people to know.

You can check out Freeze’s post on the #SaveMayowa Saga below. 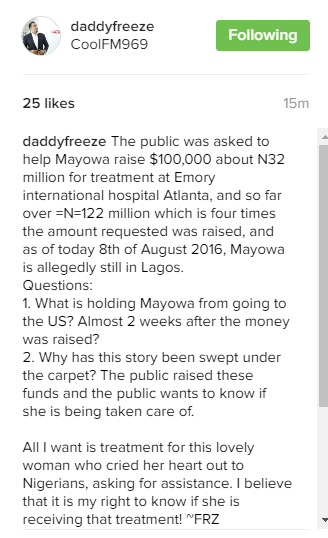 How Dare We Piss on Our Nigerian Athletes?