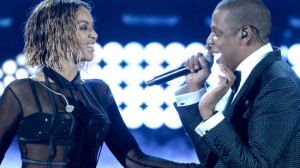 Crazy hot, obsessed, tears — and that’s just some of the stars’ reactions! Hollywood A-listers just couldn’t hide their excitement during and after Beyonce and Jay Z’s ultra sexy “Drunk in Love” performance opener at the 2014 Grammys Sunday night.

Among those who lost their you-know-what via Twitter watching the couple’s duet at the Staples Center in L.A. were Lena Dunham, Neil Patrick Harris, Kelly Clarkson, and Christine Teigen. Read on for their comments, and others:

Lena Dunham: HOLY S–T BEYONCE you aren’t even a woman anymore you are the world and you are the lord…When Beyonce giggles un-selfconsiously in front of the whole music industry it’s pretty clear she’s surpassed the earthly plane

Ronan Farrow: I see no good reason why I’m not married to Jay Z and Beyonce.

Kelly Clarkson: It’s so weird but me and my husband look just like Beyoncé & Jay Z when we’re dancing and grinding. Timberlake was right #mirrors #crazyhot

Gabrielle Union: Just watched it again… there is only ONE Queen B… #Beyonce #ImDrunkInLove

Patti Stanger: I want @Beyonce glittery tights! How awesome was she n her hubby? Great opening act, def puttin her on my bucket list of concerts.

Jamie Chung: YES I love me some Beyoncé #GRAMMYs

Of A Presidential Aspirant And His Delusion by Mustapha Abdullahi

YouTube Reveals Top Tips Of Getting Most Of Its Music

BBNaija: Ozo Reveals Why His Quest For Nengi Was Uncontrollable