A female journalist was left very annoyed with Barcelona defender, Samuel Umtiti after he mistakenly poured beer on her.

The incident occurred as Barcelona were celebrating their Spanish La Liga title win on Monday evening around the boisterous streets of Catalonia.

Recall that Ernesto Valverde’s side had clinched the league title on Sunday with a 4-2 win over Clarence Seedorf’s Deportivo La Coruna, with Lionel Messi grabbing a hattrick.

The Barcelona team then celebrated the title triumph by rejoicing with fans in open-top buses.

The 24-year-old Umtiti, who was clutching a mug of beer, was with his fellow players inside one of the vehicles when his beer spilled, drenching a journalist, Helena Condis, of Cadena COPE and others.

She reacted furiously, telling him: “I’m going to kill you,” and held her hand to her neck to show the sign of slitting a throat.

The footballer immediately apologised to her and the partying continued. 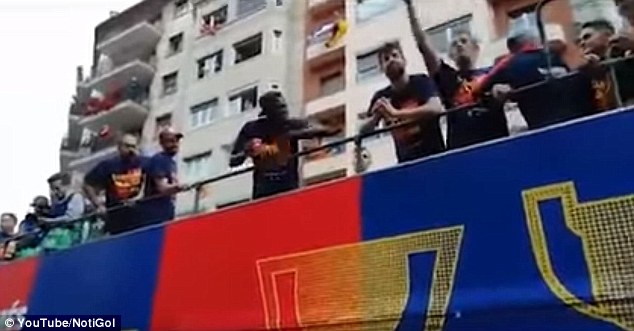 Samuel Umtiti and Barcelona teammates up on the open-top bus

VIDEO: David Beckham In Tears After Son Brooklyn Surprises Him

PHOTOS: Obasanjo and Atiku Spotted Together In Lagos