Common sense senator Ben Murray Bruce was recently in the eye of the storm over his issues with the Asset management corporation of Nigeria AMCON who had seized a number of his properties for defaulting on an N11bn loan.

According to Sahara Reporters, it has been gathered that part of a loan obtained from Union Bank which was meant to finance the Abuja Entertainment Center nay have been illegally diverted to buy a plush mansion in Beverly Hills California.

Sahara Reporters reports that banking sources in Nigeria have revealed that the Senator who is most notable for his #BuyNaijaToGrowTheNaira movement took the N11bn loan from Union Bank in 2007 and instead of investing in Nigeria bought a mansion in the US.

An excerpt of Sahara Reporters reports says this; The Los Angeles County Property Assessor’s Office, the Real Estate Records office, and the Special Investigation unit confirmed to SaharaReporters that the Nigerian senator from Bayelsa State purchased a property on August 6th, 2007 and remains the owner. The address is 605 North Camden Drive, Beverly Hills, CA 90210.

A public records search, also confirmed by municipal employees in Los Angeles County, assessed the value of Senator Murray-Bruce’s land at $3.1 million. The value of the mansion and other structures at the property was estimated at no less than $795,000.

The senator’s Beverly Hills swanky property has four bedrooms, three bathrooms, and a swimming pool and is estimated to be at least 2,777 square feet. Assessments of real estate platforms show that the property is worth $5 million as of today.

A document linking Ben Bruce to the property was obtained by Sahara Reporters who also gathered that the other person linked to the property,  a Mrs. Stella Albright was actually a board member of a company, Dream Magic Studios LLC, alongside Mr. Murray-Bruce.

An image of the bond receipt can be seen below. 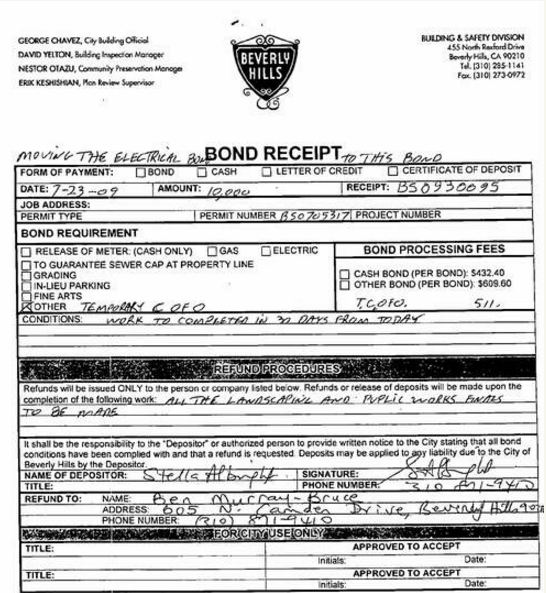