Nigerian lawmakers have begun to adopt new strategies to ensure their safety while travelling by road.

This is expected as the number of kidnaps, killings, and robbery on major roads in the country have increased in recent times.

One of the strategies already being adopted includes removing number plates which expressly indicates they are lawmakers.

They are also said to have stopped telling outsiders their whereabouts, restricting such information to family members whom they can trust.

However, while some have begun to ditch their security aides when traveling, others are of the opinion that it may prove costly, and in fact, having greater implications.

Within the past month, the prices of train tickets have reportedly risen as result of the patronage by politicians and high-profile Nigerians.

They have all abandoned the Abuja-Kaduna express way as a result of the continuous banditry activities being experienced by road users.

One of the Senators from the North Central region revealed that he has been traveling without really informing people about where he is headed or the route he would take. 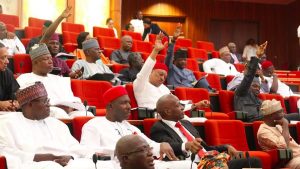 Meanwhile, Mr. Olusegun Odebunmi, who is also a lawmaker, emphasized on the avoidance of official number plates in other states apart from Abuja, adding that the possibility of being a target would be reduced that way.

He stated, “ We are in serious danger. While some parts of the country are okay (safe), some are not. If you are living in Abuja, using the official number plate may not cause issues. But if you are outside Abuja or you are travelling out of it by road, official number without security officials will attract serious danger to you. If you are going outside Abuja by road, use the ordinary (private) number except you are moving with security personnel.

“Nigeria seriously needs to do something. Many VIPs are seeking police cover for themselves but can we continue with this? How many policemen do we have in the country that they will be assigned to all the VIPs? What happens to the common man? The best thing is for the country to do something by engaging more personnel and providing more equipment and technology – sophisticated ones.”

Senator Emmanuel Bwacha who represents Taraba South district equally shared his opinion, stressing that the lives of security aides are equally in danger because the criminals have superior fire arms to the ones they use.

“The kidnappers move around in large numbers carrying weapons that are even superior to what the security aides are carrying. If you don’t want to waste the lives of your aides, it is better not to always move round with them,” he said.