There is prospect that Nigerian victims of xenophobic attacks in South Africa may soon get some justice, as Ms Soyata Maiga, Chairperson, African Commission on Human and Peoples’ Rights has agreed to “take appropriate action” on request by Socio-Economic Rights and Accountability Project (SERAP), asking the commission to “submit a case on the escalating xenophobic attacks against Nigerians and other African citizens in the country to the African Court on Human and Peoples’ Rights and to seek an effective remedy and reparation for Nigerian victims.”

SERAP had in its letter to Ms Maiga last Friday stated that “these xenophobic attacks constitute serious violations of the human rights of Nigerians and other African citizens in South Africa.” The organization also urged the commission to “seek in the case to the African Court, punitive damages and adequate compensation of $10 billion (USD) on behalf of hundreds of Nigerian victims and their families. This amount will sufficiently take into account the individual harm suffered by victims.”

In an email response to SERAP today, Maiga said: “Thank you for your open letter requesting our commission to take action to the court. I have just shared the letter with Ms Jamesina Essie King, the Chair of the Working Group on Economic, Social and Cultural Rights, for follow-up and appropriate action.”

Responding to Maiga’s email, SERAP deputy director Kolawole Oluwadare, said: “Thank you very much for your email and quick response to our request. We really appreciate your commitment to human rights in Africa, and the indication and assurance that the commission will take action on this very important matter, and to address the grave human rights violations of Nigerians in South Africa. Please let us know if you have any questions or need any further information.” 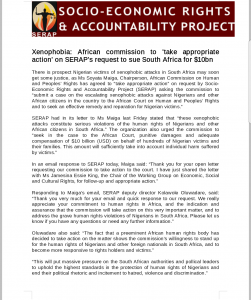 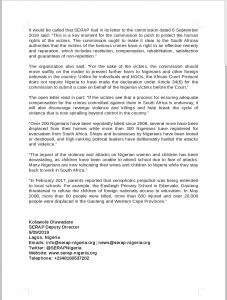 Oluwadare also said: “The fact that a preeminent African human rights body has decided to take action on the matter shows the commission’s willingness to stand up for the human rights of Nigerians and other foreign nationals in South Africa, and to become more responsive to rights holders and victims.”

“This will put massive pressure on the South African authorities and pollical leaders to uphold the highest standards in the protection of human rights of Nigerians and end their political rhetoric and incitement to hatred, violence and discrimination.”

It would be called that SERAP had in its letter to the commission dated 6 September 2019 said: “This is a key moment for the commission to push to protect the human rights of the victims. The commission ought to make it clear to the South African authorities that the victims of the heinous crimes have a right to an effective remedy and reparation, which includes restitution, compensation, rehabilitation, satisfaction and guarantees of non-repetition.”

The organization also said: “For the sake of the victims, the commission should move swiftly on the matter to prevent further harm to Nigerians and other foreign nationals in the country. Unlike for individuals and NGOs, the African Court Protocol does not require Nigeria to have made the declaration under Article 34(6) for the commission to submit a case on behalf of the Nigerian victims before the Court.”

The open letter read in part: “If the victims see that a process for ensuring adequate compensation for the crimes committed against them in South Africa is underway, it will also discourage revenge violence and killings and help break the cycle of violence that is now spiralling beyond control in the country.”

“The impact of the violence and attacks on Nigerian women and children has been devastating, as children have been unable to attend school due to fear of attacks. Many Nigerians are now relocating their wives and children to Nigeria while they stay back to work in South Africa.”

“In February 2017, parents reported that xenophobic prejudice was being extended to local schools. For example, the Eastleigh Primary School in Edenvale, Gauteng threatened to refuse the children of foreign nationals access to education. In May 2008, more than 60 people were killed, more than 600 injured and over 20,000 people were displaced in the Gauteng and Western Cape Provinces.”

Gbajabiamila expresses happiness over the resolution of Bauchi Assembly crisis

House of Reps never apologised to Buhari over invitation – Spokesman