Shehu Sani: “With intolerance for freedom of speech, June 12 celebration like body without soul”

A veteran of the June 12 struggle, Senator Shehu Sani, says celebrating the epoch-making day in an atmosphere of intolerance for freedom of speech makes nonsense of it.

Sani, who was Senator for Kaduna Central in the 8th Senate, stated this in a tweet on Friday ahead of the Democracy Day celebration.

June 12 is one of the most memorable days in Nigeria’s political history as it is the day the nation held what is regarded as its freest and fairest presidential election.

That election held in 1993 was annulled and its presumed winner, Chief MKO Abiola detained.

Many critics of the military regime that annulled the election, including Sani, were imprisoned, exiled, or killed.

To commemorate the day, President Muhammadu Buhari on June 6, 2018, formally announced that June 12 had been set aside to mark Democracy Day in Nigeria.

It replaced May 29, which is still retained as the day of transfer of power between administrations.

However, this year’s Democracy Day will hold amid an indefinite suspension of Twitter in Nigeria, a move that critics say was aimed at stifling freedom of speech.

In defiance, some Nigerians have planned a massive protest on this year’s occasion of June 12 to press home their demands for an end to insecurity, unemployment, economic hardship, among others.

Speaking on the importance of June 12, Sani said, “Intolerance to freedom of speech has June 12 democracy day celebration a body without a soul”. 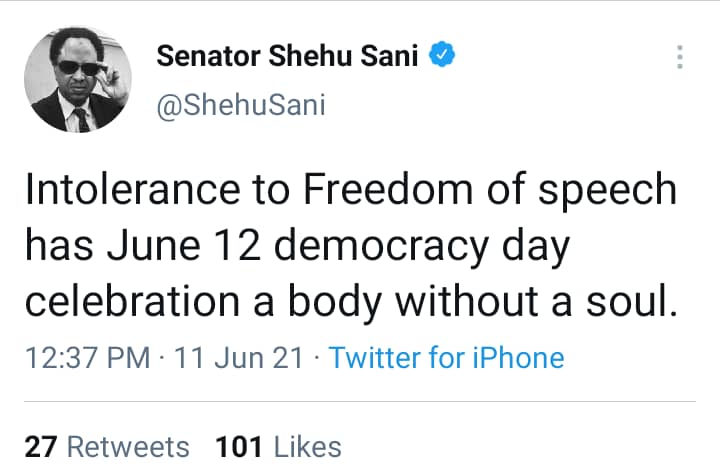 They Have Eyes But Cannot See. Pity! By Femi Adesina