Shocking! This Boy Was Chained And Locked With Goats (Photos)

In what could be described as the epitome of cruelty to humanity, a boy was reportedly chained and locked in a livestock keep by his master at No.5 Offin canal, Lagos Island.

Though the offence of the unnamed boy, who serves his master as a houseboy, is not clear at the moment, it was reliably gathered that it was not the first time such severe punishment would be meted out to the boy by his Nigerian boss.

The latest in the series of punishments saw him locked with goats for days without any food.

The boy’s ordeal was disclosed by a concerned citizen of Nigeria, who said: “pls this is what a man in lagos island, did to the house boy staying with him, I think the right authorities should be invited, he needs to be brought to book.

How can someone padlock a child’s leg and throw him where goats stay? And locked the gate too. Pls help me share this but I want to remain anonymous The house address is No 5 offin canal Lagos island market” 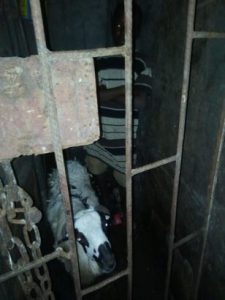 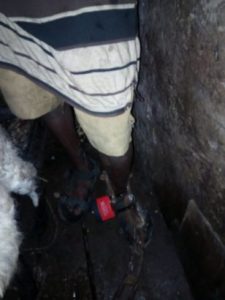