SHOCKING: You won’t believe WHY this APC chieftain almost beat his mistress to death 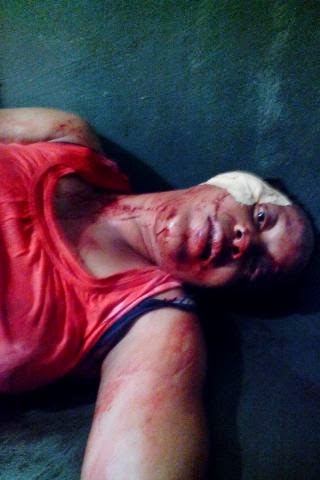 Last week images of a woman allegedly beaten by Chief Bayo Awosanya, an All Progressives Congress chieftain in Ogun state emerged. The woman had several lacerations, and gashes on her face and other parts of her body.

Information at the time was that the woman was the husband of the man, but new details have shown that she was only a girlfriend and had received numerous beatings by the man in the past.

In this SaharaReporters exclusive, we learn more about what caused the incident and what the police are doing to apprehend the man who is now on the run from the police.

First in case you missed the story or have not seen the gory photos, go here. (Viewer Discretion Advised)

Bayo Awosanya, a prominent member of the All Progressives Coalition in Ogun State, has gone underground after he allegedly battered his mistress who asked to be identified simply as Victoria. According to the victim and a police source, Mr. Awosanya beat his girlfriend over her failure to join him at a social party over the weekend.

The victim, who has a child with her alleged assaulter, told SaharaReporters that she was determined to end the relationship.

Our police source said the APC official had asked Victoria to meet him at a “house warming” party, but got uncontrollably furious when he returned from the event and found her still at home. As the mistress attempted to explain her absence, Mr. Awosanya dealt her several blows to the face and head.

The victim, who showed serious head wounds, explained that she had fallen asleep after receiving Mr. Awosanya’s telephone call, waking up only after the party would have been over. Irate, the APC official reportedly pummeled her with punches before bashing her head into a glass-window steel grille, telling her it was time for her to die.

In an interview with SaharaReporters on Friday, the victim, Ms. Victoria, said she had tried to escape the assault, but Mr. Awosanya grabbed her hair weave-on and violently pulled it out. She added that the APC official was fond of physically maltreating her. Ms. Victoria stated that she could no longer remember the number of times Mr. Awosanya battered her. She told a correspondent of the website that the last beating was too gruesome because she feared he was about to kill her. She vowed to end her relationship with the politician.

She said Mr. Awosanya had given her a vicious beating in 2008, two days before their “introduction ceremony,” a prelude to traditional marriage. She explained that she had often postponed their marriage plans due to fear of the politician’s horrible temper and his possible involvement in “fetish” and a dangerous lifestyle.

Mr. Awosanya was in line to become an executive member of the APC after a party congress that held yesterday.

Ms. Victoria accused the APC politician of practicing different kinds of religions out of desperation. She added that he engages in all manner of rituals in a desperate bid to advance his political goals and financial interests.

She disclosed that Mr. Awosanya had once forced her to swear to a “fetish” oath in which she had to pledge never to sleep with another man except after his death.

Ms. Victoria disclosed that she and Mr. Awosanya have a two-year old baby named Jomiloju.

Officials of the Ogun State police command claimed that they could not find Mr. Awosanya to arrest him, but a police source told SaharaReporters that they knew the politician was in town. The source added that the alleged batterer was expected to be present at his party’s state congress where he was going to be inaugurated as the APC’s financial accountant.

“We know where Chief [Awosanya] is, but our commander doesn’t want to be involved in this palaver,” our police source said.