BREAKING: Nigerian Artiste Sky B is not dead, He is on a movie set

Following the news making rounds on social media about the death of a popular Nigerian Musician Sky B, Friends and family have come out to debunk the rumored death of the Artiste, saying he is very much alive and nothing is wrong with the Artiste.

Suzzy Gloria Jackson, a very close friend to Sky B, made this revelation via her facebook page, saying the Artiste was currently on a movie set.

In Suzzy Gloria’s words, It is rumored Sky B (Ma Bebe) is dead, Sky B is not dead, He is alive. They are acting movie in Owerri

Also, Ugbo Ndioma, a friend to the Ma Bebe crooner also debunked the rumour. He wrote it on his twitter page

Sky B is much alive. We just contacted his family and they confirmed he’s alive. Please RT this. #SkyB 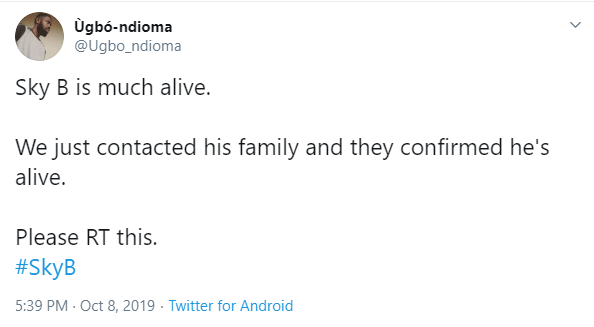 This will not be the first time a Nigerian Artiste will be rumored to have died even when they are still very much alive. It is said to be a Publicity stunt to make people aware of their existence, which would translate to awareness of their music. Recall, Skibii Mayana also pulled the same death stunt in 2016.

@rosychyk tweeted: He needs to come out and debunk the story then. Why is he quiet??

@top_boiy tweeted: Expect a new single from him if truly he is alive

@paulizbeet: Really? Why is it anybody’s name that starts with “sk” that does this shit! Same thing with skibii

@uncle_scratch_ : I swear this has just annoyed me. I had even posted a whole we will miss you post on FB and iG. What a waste of my time

BREAKING: Nigerian Artiste Sky B is not deadSky B is on a movie setSky B not dead
0
Share FacebookTwitterGoogle+ReddItWhatsAppPinterestEmail