Smugglers conceal $2.3 million worth of marijuana inside pepper (photo)

Officers of the United States Customs and Border Protection have impounded about four tons of marijuana, hidden within a truckload of red pepper known as Jalapeno peppers.

The banned substance is said to have been snuffed out by a sniffer dog after the officers decided to check a truck which had supposedly been filled with pepper.

But after uncovering the marijuana boxes hidden within the consignment, the officers realized that its content was weighing 7, 560 pounds, meaning they were worth as much as $2.3 million.

Speaking on the incident, an officer said, “A 37-year-old male Mexican citizen entered the port of entry driving a tractor pulling a trailer with cargo manifested as jalapeno peppers.” 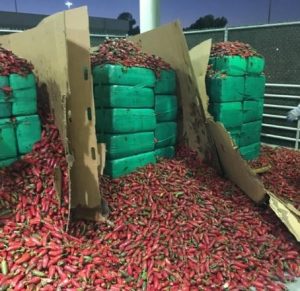 The director of Port Otay Mesa where the marijuana laden consignment was impounded, Rosa Hernandez, applauded the officers on duty at the time saying, “I am proud of the officers for seizing this significant marijuana load.”

Meanwhile, Mark Morgan, the Commissioner of US Customs and Border Protection has confirmed the reports and has since posted an image of the impounded boxes of the hard drug on his official Twitter account.

In 2019 alone, US customs have impounded as much as 113 tons of marijuana, 41 tons of cocaine, and 27 tons of methamphetamine.

Doctor electrocuted while trying to rescue another victim in Lagos