A Nigerian doctor, name undisclosed, was denied visa by the United Kingdom for being owed 4 months salary.

The application to the United Kingdom was met with a rejection mail by the embassy. 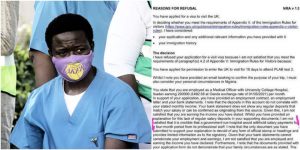 An Instagram user @ije_luv who shared a copy of the rejection letter captioned it: “Nigeria in the mud.”

@ije_luv highlighted one of the reasons given for the rejection as the embassy’s inability to understand why a government run hospital would withhold the salary payment of a professional staff for four months.

Other reasons why his application was denied, according to the embassy was that his bank statement does not corroborate his earnings, their satisfaction with his employment status in relation to his earned income and so forth. 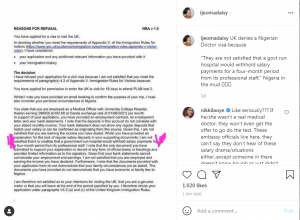 Among the reactions was @nikkilaoye who said, “Like seriously??? If he/she wasn’t a real medical doctor, they won’t even get the offer to go do the test.

“These embassy officials live here, they can’t say they don’t hear of these salary drama/situations either..except someone in there doesn’t know his job or just didn’t want to give the visa.. Aww this is unfair to the applicant sha..

“All just trying to get a better job and a better life. God will help him/her,” she said.

@uwazurum wrote: ”They know what is going on. They just don’t want to issue the Visa.”

@luciangoddy thought: “Backing his claims up with evidence would have helped… Eg. Newspaper or online news for the said period of salary withhold…”

SHOCKING: Cannibal jailed for killing, eating mum with his dog