Mr. Vaughn E. Itemuagbor has taken to social media to describe the unpalatable treatment he claims to have received from a squad of the Special Anti-Robbery Squad (SARS).

He states that he has had two run-ins with the with SARS officers this year, in one they inflicted bodily harm on him.

Itemuagbor, who claims to work for between 18 and 20 hours daily, says that though he studied Plant Science in school, he took up computer programming in order to make a reasonable living.

Describing himself as “one of the most sought-after computer programmers in Nigeria,” Itemuagbor says that SARS officials seem to have singled him out for “torture on a monthly basis.”

He says he has reported the issue to the Police “multiple times,” but that “nothing has ever been done.”

He even took his case to the “Public Complaint Rapid Response Unit – PCRRU, Nigeria Police Force,” but he didn’t get a reprieve.

“You are a young man, you drive a car and stay in Port Harcourt. You must be guilty of some crime,” he claims the SARS men told him during his last Sunday encounter with them, sequel to which they proceeded to beat him up, allegedly unprovoked.

“Admit you are a Yahoo boy and write it down here, else, I go continue (the brutality),” Itemuagbor says a SARS official told him.

“Those are the words he repeated continuously as he raised his hands and landed multiple blows on my body,” Itemuagbor says.

As if that wasn’t brutish enough, Itemuagbor says, his tormentors forced him to pay N150,000 for his freedom, while they also allegedly coerced him to implicate himself in a statement.

“At the end of the day, they took 150k from me, and asked me to write that I offered them a bribe to facilitate my release. All this happened in under three hours on Sunday,” Itemuagbor says.

The encounter has left him “very sad and depressed,” he laments.

See the picture below: 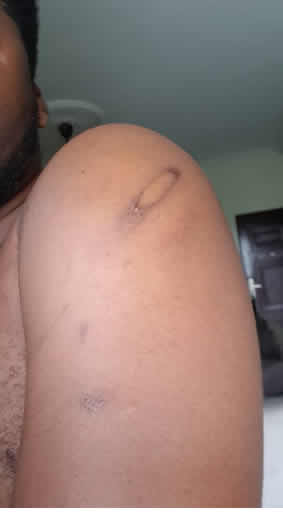