Twenty two -year-old Umar Yandaki has been reported to have broken Prof. Mahmoud Yakoob’s record of First Class of Bachelor of Arts in History.

Our correspondent gathered that, it is Professor Mahmud Yakoob who is the incumbent INEC National Chairman is the first person to graduate with first class of History for the past 33 years in the entirety of Usmanu Danfodiyo University Sokoto and in Northern Nigeria at large.

However, UMAR YANDAKI who is an indigene of Kastina state has also seconded the first valedictorian in History by clinching the First Class Feat in the department of History,Usmanu Danfodiyo University Sokoto which makes him the second person to achieve such a tremendous feat in the history of Northern Nigeria

The young historian, who is also a writer, in this interview with our correspondent, MUHAMMAD ADEYEMI speaks on how the commitment and labour of his History teacher in secondary school and the guidance of his father who is also a Professor of History helped him during his undergraduate studies.

Can you let us into your background?

UMAR YANDAKI:
Well, I am Umar Aminu Yandaki. I am an indigene of Katsina State, but I was born and brought up in Sokoto State, where I underwent my studies from primary school up to the university level. I am now a graduate, Alhamdulillah.

What was your academic performance during your primary school and secondary days?

UMAR YANDAKI:At the primary School level, I attended Unity Comprehensive School Runjin Sambo Sokoto. Typical of the education system in Nigeria, pupils’ IQ is rated based on their termly report cards (result sheets). The memories are crystal- clear that I used to get 1st position, sometimes second or third. In some cases up to 5th position as conditions warrant. Nevertheless,I am very sure, with all sense of modesty that I used to be among the best in my class.At the secondary school level, I attended Usmanu Danfodiyo University Model Secondary School. Here, the story was a little bit different. Before I could adapt to the new environment, I suffered some setbacks. I could recall, that made my late mother to start thinking of taking me back to my former school. With time, however, I was able to cope. In the concluding years of my studies there, I found myself among the best students of Arts and Humanities. I even bagged a price as the best student of history at a time. The credit, however, with all sense of humility, goes to my secondary School History teacher, Dr. Mansur Abubakar Warrah. I have said it elsewhere that Dr. Wara and a teaching practice Student, Abdulaziz Isa Bawa, who also taught us History at the secondary school level jointly played a significant role in boosting the passion for the study of History in my heart. Words cannot express my gratitude to duo.

The dream of Most Art and humanity students right from their secondary schools is to become a Lawyer or to study Mass Communication, how is the case different from yours?

UMAR YANDAKI:My case is different. Already, my father, Professor Aminu I. Yandaki is a professional historian. Right from the beginning I have been inspired by his trans-disciplinary personal library, which possesses thousands of books. At that very point in time, my thoughts always revolved around this: “in a long run, who will inherit this heap of books and articles?”

Amidst this, I was subjected to taking a decision on the aspect of knowledge I would like to venture into.
When I was about to start my senior secondary education. I went straight to my father and asked him to make a choice for me; That should I go into the sciences or I should choose humanities?. But he insisted that I must make the choice by myself. Helplessly then, inspired by him (as a Professor of History) and his trans-disciplinary library, I chose humanities. I told him clearly that I wanted to study History at the University level, and so it became.

But as I said earlier, it was more so due to the nice treatment I received from my secondary School History teacher, Dr. Wara who happened to be my Father’s student. Indeed, this signifies the importance of good mentorship. It has really helped me.

How can you describe your 4years duration while on campus?

UMAR YANDAKI:Well, the four years I spent on campus are the most important to my life so far. If those years are to be portrayed graphically, they will consist of a series of peaks and valleys, corresponding to the successive moods of exultation and depression; progression and reaction. And the highest peaks would be found to synchronize with the daily transport from house to school; the unexciting examination seasons; the happy moments of results checking; the good relationship and interactive sessions with lecturers in classes; and the horrible “get out of my office” remarks, especially during registrations. Moreover, academically it was within those four years that I became exposed to rigorous and critical thinking as a problem solving skill. This of course is a cardinal principle in historical research as one strives to sift out the truth from the fallacy and the real from the fantasy.

How were you able to achieve this feat of breaking the 33 years old record of Prof MAHMUD YAKOOB in the whole northern Nigeria?

UMAR YANDAKI:When I was about to start my university education, my Father (a Professor of History in the same institution) sat me down and told me that he wants me to graduate with 2.1. This singular engagement with my Dad, who was emphatic about 2.1., who also was already in the system reveals how tough people believed it was to graduate with first class in history.

But for me, I believe there is nothing in this world that I cannot do as far as it is not beyond the ability and powers of human beings. From the beginning, I was told that Prof Mahmud Yakoob was the first and only person with a first class degree in history in the whole northern Nigeria. In fact, on seeing my first semester results, some senior colleagues clearly told me that I cannot retain such grades to final year.

From then, I took it as a challenge and started working!

How were you able to sustain your CGPA considering how hard it could be schooling In UDUS?

I did not only retained my CGPA, but I also kept improving it session by session up to 400level. I was able to do this through three major ways. First, by researching and exploring information and ideas on the courses I was to take in a session prior to the beginning of each session. Secondly, by being committed to my studies. Because I hardly missed lectures. I also prepared my personal lecture notes, assignments and seminar presentations in good time. Thirdly, by praying hard.

What gave you an edge over other students?

UMAR YANDAKI:Well, I don’t really know. I can only guess. I guess it’s because of the following reasons:
First, from the beginning, I choose History myself. But a lot of them did not choose it as their most preferred course. In fact, one of us called himself a victim of circumstances because he was offered admission to study History in the Department.
Furthermore, because my father is a Professor of history. He guided me throughout my studies, and also gave me free access to his personal library. In fact, almost throughout my studies, it was only on few occasions that I would go out in search of books for reading and assignments. But for my colleagues, I think they don’t have such an advantage.

Moreover , there may be the issue of quick comprehension, as well as solid background especially in English language. I have personally met a number of university students with the inability to construct good sentences in English.

And finally,it is Allah’s will.

How cordial was your relationship with lecturers ?

UMAR YANDAKI: My relationship with most of them has been and is still very cordial. As for my grades, I truly worked for them. But I have to confess that my lecturers have really helped me with advice and good mentorship.

Can you tell us about your reading schedules?

I can’t really define my study habits. Anyway, I usually sit down, conduct research and construct notes on the major issues discussed in each course. As usual, I hardly forget what I wrote myself. So when it’s exams time, I only go through my notes once again and pray for success.

Did you participate in any extra-curricular activities?

I actively participated in student Unionism. However, I am game less. I do hangout with friends too.

Did you forget what you read in exam hall? If yes, were there any other challenges?

Actually this is what I have been thanking God for. I have never forget what I read in exam halls. In fact, just two days after the death of my Mother, I wrote a test and had the best score in my class.

The fact that, your father is a professor of History, how will you describe your father’s impact in actualizing this feat in his field?

UMAR YANDAKI:Actually, my Father had been very impactful towards achieving this feat. He provided me with all the basic necessities both moral and financial. He gave me books; sometimes extra lessons; a car for easy transportation to school; a laptop which I used for most of my assignments; and many more.

Also being his son, quite a number of my lecturers among whom are his friends and mentees were willing to be my mentors. They trained me on how to write essays and even spare their valuable times to go through and edit my write-ups

What is your advice for Nigeria students?

UMAR YANDAKI:My advice for Nigerian students is that they should always read. They should read most pieces of write ups that come their ways. Indeed, for everything you read, you must learn something. They should also be Good fearing and prayerful. They should also instill self discipline in themselves (remember, change begins with you!). They should also, irrespective of their courses of study, be History-conscious.

All of us should be willing to further our studies up to PhD level. I will be the happiest person on Earth to see all the present undergraduate students in Nigeria with a PhD degree in the next 10-15 years to come. At least if a bloody revolution did not take place in Nigeria, an intellectual type will. And hopefully, Nigeria shall rise again! 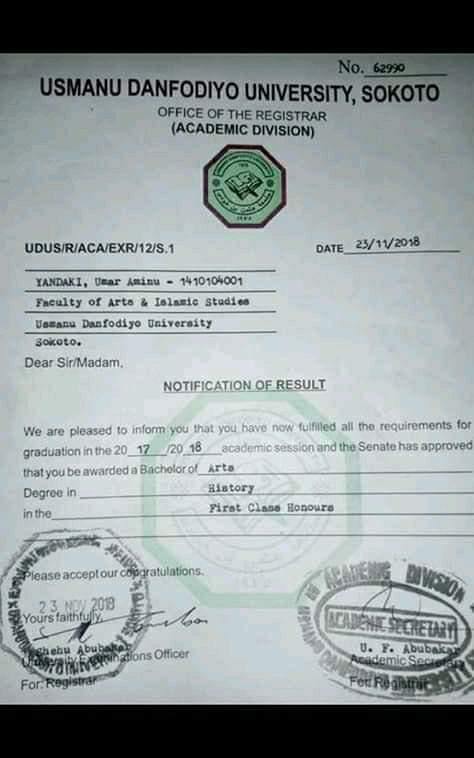 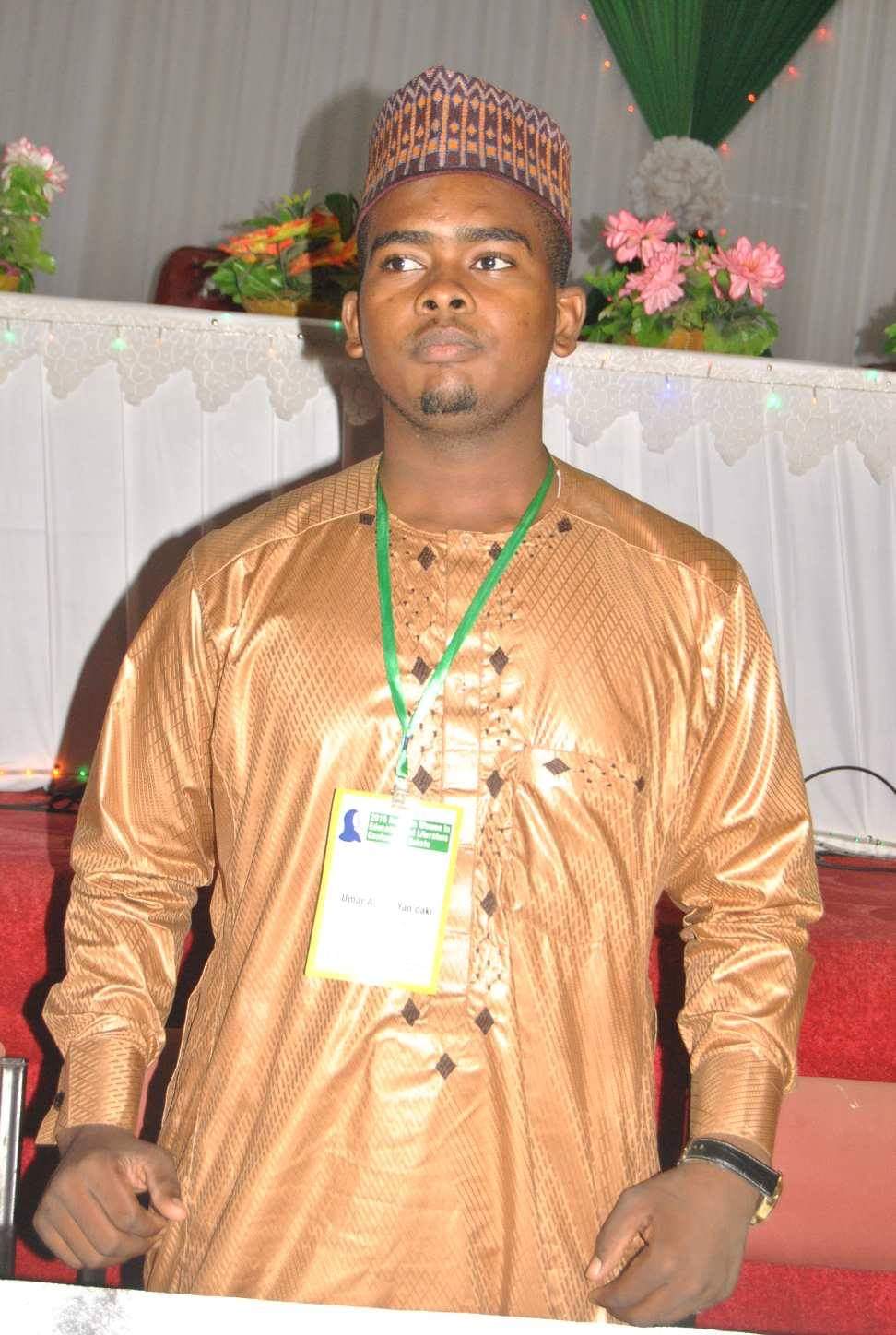 No plans to return some schools to original owners – Oyo govt

Why we withdraw licenses of all private schools in Plateau – Commissioner