Solskjaer couldn’t contain his joy after Manchester United eliminated Arsenal in the FA Cup on Friday.  The match ended at 3-1 in their favor and Solskjaer was left in awe of his team’s counter-attacking football against the Gunners.

All  night, they were sharper in the last half, leaving Arsenal players to chase the ball at different times.

Solskjaer revealed that his tactics, even though seemed unusual, gave United the victory they had. He then used the Champions League semi-final match as a reference. 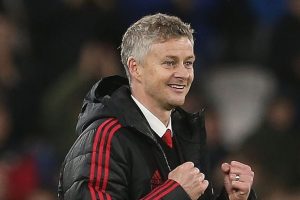 He stated, “If you go through the history and the games we’ve played against Arsenal that’s how it is.”

“I remember a goal I scored in 1997 after we defended a corner – it went from Giggs to Karel, to Andy, and into me.

“Everyone knows about the classic Champions League goal [in 2009] with Ji [Park Ji-sung], Cristiano [Ronaldo] and Wayne [Rooney] running forward.

“Wazza has scored a couple more like that, as has Ji, so the counter-attacking threat that we have is in our history against Arsenal.”

Starting Lukaku on the right for the match was subjected to many criticisms early on. But the Belgian soon proved productive when he sent two assists in the ways of Lingard and Sanchez.

Solskjaer further explained, “Rom has played there for Belgium and Everton,” he added at a post-match news conference.

“It’s a tactic we can use and we know how strong he is. He held the ball up and ran the channel. It was a fantastic pass for Alexis’ goal. It was a great finish.”

The interim coach equally discussed the Heroics of Lingard who scored a brace in the match.

“Jesse’s a big game player,” Solskjaer said. “He’s shown that for England, for us. He always pops up with goals.

“Jesse is someone we never, never hesitate to put in a Man United team and he’s been brought through this system, he knows what this means, he knows the club, he knows this history, he knows all the counter-attacking goals we’ve scored against Arsenal.

“He knows everything about the club and he’s someone we’ll look after,” he explained.