Nigeria’s foremost Nobel laureate, Wole Soyinka, has against all odds, agreed with what former president, Chief Olusegun Obasanjo, highlighted concerning the antics of the Buhari-led government.

Obasanjo had visited Delta State last week and stated that the insurgencies by Boko Haram, as well Fulani herdsmen are somewhat becoming plans to “Fulanise” the nation and West Africa as a whole.

However, Lai Mohammed, the Minister of Information, promptly fired back at the former president, iterating that such comments were aimed at causing division in the country.

Now, Wole Soyinka, who hardly agrees with Obasanjo, has stated that the former military head was not wrong after all.

The Literature Professor criticized the Federal Government for not heeding to the Obasanjo’s urge for collaboration among all ethnic groups of the country in a bid to fight against recurrent security challenges in the country. 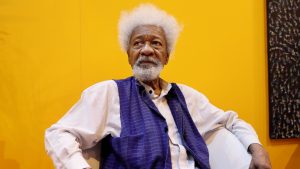 Wole Soyinka aired his opinion while addressing the audience at an event organized by UBA.

He stated, “Unity is possible even in the plurality of our languages.

“Everybody knows that my relationship with Obasanjo is not too cordial but at the same time, we should be very careful not to be dismissive. If there is a substance, the language must be put aside for a moment.

“I heard the Minister of Information, and I had the feeling that they are leaving aside the substance and worrying too much about the language. Obasanjo was calling for a meeting of stakeholders on a very serious aspect of social menace this country is undergoing.

“This country is undergoing a horrendous descent into the abyss. The perfect picture of Africa is what we must continue to uphold in view as leaders have used the word ‘unity’ to destroy our people. “The issue of Boko Haram is currently being discussed in the House of Parliament in England in relation to Africa’s well-being.’’

Amaechi to Buhari: “Most of us are not happy that you moved from your autocratic nature”