Senator Shehu Sani who represents Kaduna Central has stated that lecturers should no longer engage in INEC related activities as a result of the occurrences and illegalities that plagued the just concluded elections.

He argued that the continuous involvement of these individuals may have a negative impact on the reputation of their profession and the entire educational system in the country. 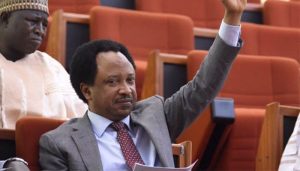 The senator whose opinion was shared through his official Twitter handle, wrote:

In the light of the new revelations, University lecturers should pull out from participating in the conduct of national elections to save the reputation & protect the moral sanctity of the academia. The Ivory tower shouldn’t be smeared with political feaces.

It may be recalled that Nigeria’s election umpires have mostly been drawn from the Ivory Tower, and because of the acrimony that often attends elections in the country, most critics have faulted the acceptance by university lecturers to superintend elections that may be deemed inconclusive or rigged.

So far between 1987 and 2019, no less than six university teachers in the professor cadre have served as chairmen of Nigeria’s electoral bodies. They include the following:

Also, read: Buhari’s ministers have mansions all over Abuja and he’s shielding them – Buba Galadima

Decision on zoning will be taken at appreciate time – PDP, Governors