Lovers of SUPERSTORY, Nigeria’s most-watched TV Drama, are in for a treat as Wale Adenuga Productions is set to commence the much-publicized new season of SUPERSTORY, titled REVENGE, as the first episode will air to millions of families across Nigeria on Thursday 3rd September 2020 on AIT Network. 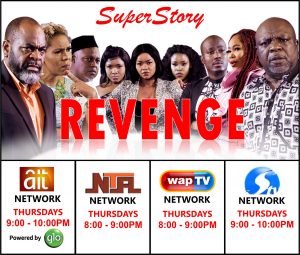 According to Wale Adenuga Jnr., Producer of SUPERSTORY TV Drama, “We are really proud of all the effort which went into producing this project. REVENGE tells the story of Juliet, Kristin, and Soma, who embark on a mission to prove to the people responsible for the holes in their lives that revenge truly has no expiry date; but the road to vengeance comes with unexpected twists and turns. The story is really amazing, and viewers are going to be taken by surprise so many times. In addition, we would also be commencing a ground-breaking partnership with GLO, which has increased the reach of Superstory TV Drama to AIT Network.”