Surgery: Twitter user rants over friend who died during liposuction in Abuja

A Nigerian lady on Twitter has taken to the platform to lament on how a woman lost her life during cosmetic surgery in the Federal Capital Territory, Abuja, on Sunday.

According to the devastated lady, the deceased had been in good health and was doing well financially. However, she sought to reduce her body fat through a surgical process known as liposuction in the hospital, after complaining about the way it made her look.

However, things went south during the surgery as she began to bleed uncontrollably until she passed on.

The Twitter user subsequently proceeded to advise her followers on appreciating their bodies the way they were and never considering liposuction as an option when people body-shame them. Love, according to her, also implies that the partner likes the way they appear.

She continued, ” See eh, However you are, please realize that it is the best version there could ever be of you. Yes, you grow over the years. At whatever stage you moved from, that’s an upgrade to your model. The best version of you per time. If Apple can upgrade, why not for you?”

See her tweets below. 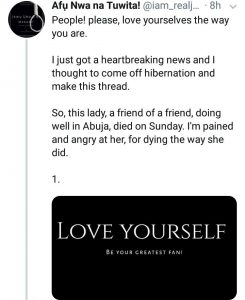 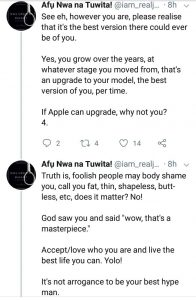 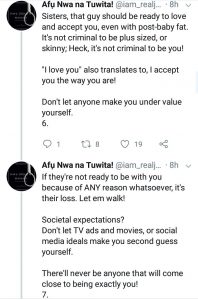 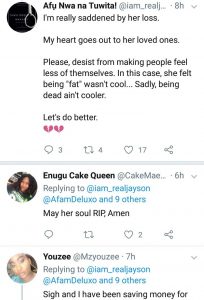 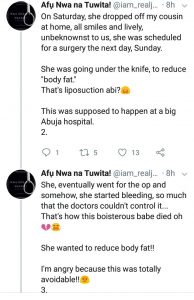 (Video): Soldier pulls out cutlass as Nigerian footballer challenges him over slap