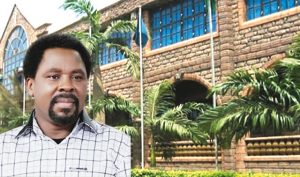 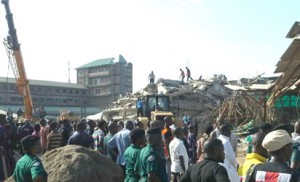 The  Lagos High Court in the Igbosere area of Lagos Island has dismissed the “no-case submission” filed by the Registered Trustees of the Synagogue Church of All Nations and two engineers involved in the collapse of a six-storey building belonging to the church ordering the Church and two engineers to answer to the charges  filed against them.

On September 12, 2014, the building belonging to the Synagogue Church of All Nations  in the Ikotun area of Lagos collapsed to the ground claiming  116 lives , majority of the victims  were South Africans visiting Nigeria on a religious tour.

In the event of the collapse , the Lagos State Government sued the church and the two engineers, Oladele Ogundeji and Akinbela Fatiregun who handled the construction of the building through their companies — Hardrock Construction & Engineering Company and Jandy Trust Ltd.

After a coroners verdict which stated unambiguously   that the church should be prosecuted for neglecting  to obtain necessary approval before embarking on the construction of the building, and that the two structural engineers be prosecuted for criminal negligence, the defendants were arraigned on April 19, 2016, but they pleaded ‘not guilty.’

The State Government at trial presented it’s its case,  had witnesses  testify and tendered documents to prove the charges levied against the defendants.

After calling it’s final witness and  closing its case thevdefendanrs proceeded to file a ‘no-case’ submission,asserting that the prosecution failed to establish a prima facie case against them.

The defendants insisted there was nothing in the evidence by the prosecution to require that they enter any defence.

They requested  the court to discharge them.

The prosecution opposed the no-case submission and argued that the defendants did indeed have a case to answer, due to the the evidence tendered through all  the prosecution witnesses.

At the resumed hearing on Thursday, Justice Lateef Lawal-Akapo dismissed the no-case submission filed by the defendants and held that a prima facie case had been made against them making it imperative for them to plead to the charges.

The  case  was adjourned until April 27 for the defendants to open their case.