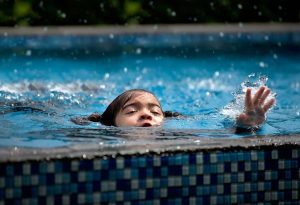 A teenager, Samson Akingbade, has drowned in the swimming pool of an unspecified hotel in Ijako, Sango-Ota, Ogun State.

The boy, aged 14-year-old, was said to have been hanging out with his friends, on Friday, Christmas day, when the tragedy occurred.

Akingbade, lost in his moment of happiness, slowly moved to the pool side to continue the fun.

It was reported that his friends did not quickly realize that the boy was drowning.

The sight of the deceased body floating was said to have sparked confusion in the hotel.

According to eye witnesses, an angry mob sought to wreck the facility following the tragedy.

The mob condemned the hotel operators for improper management of the facility which they said led to the death.

“The boy was swimming in the hotel and drowned. As a result of that, some youths stormed the hotel to foment trouble but the police responded promptly to douse the tension and restore normalcy.

“The boy went to the hotel with his friends. The problem is that the hotel does not have a lifeguard. It was an avoidable death if they had a lifeguard,” an eyewitness narrated.

While the victim’s corpse was evacuated by the police from Sango Division, the hotel was closed down to prevent a riot from erupting, another eyewitness revealed.

“I learnt that the boy and his friends came from Sango but I don’t know their address. It was police intervention that doused the tension. Youths were angry that the hotel failed to provide a lifeguard who could have observed that the boy had drowned and rescued him,” the eyewitness stated.

While confirming Akingbade’s death, The police spokesperson in the state, SP Abimbola Oyeyemi added that the boy’s corpse had been deposited in a mortuary for autopsy.

“One Samson Akingbade, 14, was at the hotel with his friends. They were swimming when he drowned. Some boys wanted to attack the hotel but the police quickly took over the situation and restored normalcy,” Oyeyemi said.