Teniola Apata , the “Billionaire” singer revealed she was seated in the plane getting prepared for the 8-hour long flight when she heard someone murmur  “hello” to her ear. She turned back to identify the face behind the voice and she was surprised to see co-musician Tiwa Savage.

Teni felt excited and humbled at the display of humility by the “49-99” singer at least not until she discovered Tiwa came to try her luck about getting a billion naira from her. 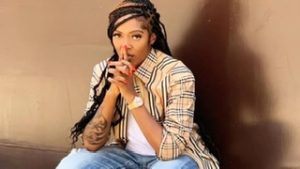 An elated Teni wrote, “Tiwa Savage surprised me yesterday, I didn’t know she was on the plane, she stood up from where she was to come say hello to me!!! Thank you for honoring me. God will honor you”

Tiwa savage on the other hand took to her Twitter page to write “I came to beg for any billion you are not using but too many people, shame catch me”. Tiwa’s comment was rather a comical one.

This recent event further proved that Tiwa Savage is not the type that snubs people unlike the incident that saw an OAP call her out some months back for not greeting him first.

The singers must have been at the just concluded One Africa Music Festival that was held in Dubai and might have not seen each other.

The “Case” crooner is not only a great singer but a comical one at that. She puts up very funny videos of herself on her Instagram page.

Tiwa savage on the other hand is also a great musician and a fashion icon. She knows what colors to mix and when to show a little skin. The singer has been in a ruckus as to whether she and Wizkid aka Starboy are having an affair or not as they can be seen getting in their feelings while on stage together.