Tesla CEO Elon Musk has revealed the long-awaited electric pickup truck at its Design Studio in Hawthorne, California, just outside Los Angeles on the 22nd of November, 2019.

When the truck was driven onto the stage, many in the crowd clearly couldn’t believe that this was actually the vehicle they’d come to see. The Cybertruck looks like a large metal trapezoid on wheels, more like an art piece than a truck.

The truck is an all electric battery powered light commercial vehicle. The trucks design, specs and styling were jaw dropping, as no one has ever seen anything like it before. The Tesla truck looks like it came from another planet.

A few things noticed about the Cybertruck are:

Instead of a separate distinct cab and bed, the truck seems to be in a uniform body. The exterior is made from a newly developed stainless steel alloy, the same metal that’s used for SpaceX rockets, Musk said. This Stainless steel makes the Tesla cybertruck bullet proof  against at least smaller firearms, including 9-millimeter handguns, Musk said.

At the unveiling, a man came out with a sledge hammer and hit the trucks body but the blows from the sledgehammer seemed to do no more than slightly mar the trucks  finish.

There was also a demonstration of metal balls thrown onto the supposedly bullet proof windows but unfortunately, the windows cracked a lot. Elon tried to make a joke out of this situation by saying, “But it didn’t go through” also adding “We’ll fix it in post”. Whether this is a particular stunt to getting people do articles on this unfortunate event is still unknown.

Musk has also made striking claims about the capabilities of this truck. Among them, he has said the Cybertruck would be more capable, in terms of towing and hauling, than a Ford F-150 and perform as a better sports car than a Porsche 911.

Three models have been announced, the most expensive version of the truck, the Tri-Motor All-Wheel-Drive, will be able to carry 3,500 pounds, tow up to 14,000 pounds and go from zero to 60 in 2.9 seconds. It will also be able to drive up to 500 miles on a full charge. Base models will have a range of 250 miles.

Drivers will also be able to adjust the ride height of the truck, for when they are on the highway or off-road, using an adaptive air suspension system.

The top end Tri Motor AWD version of the truck starts at $69,900. Buyers will also be able to choose Tesla’s “self-driving” option for $7,000. Tesla is accepting pre-orders for the $7,000 ‘full self-driving’ option.

Musk had one final surprise as the presentation was coming to an end.
“Oh, yeah,” he said. “We also made an ATV.” 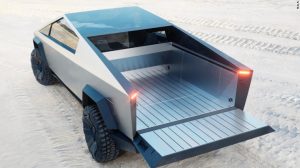 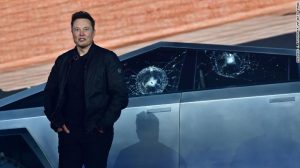 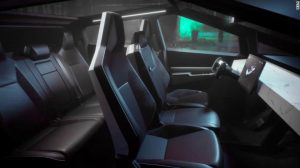 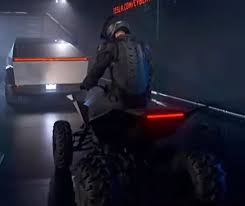 then came out from a side room on a small electric all-terrain vehicle. He flipped down the truck’s tailgate, extended a built in ramp, and rode it up into the bed.

The Cybertruck is available for preorder with a $100 deposit.