Nigeria’s foremost Nobel Laureate, Wole Soyinka has weighed in on the just concluded general elections in the country, stating that the illegalities and violence that plagued it was depressing.

The Literature Professor made his comments during the BBC programme, Hard Talk, on Tuesday.

He further stated that those in his generation have failed the country because many of the plans they had are yet to come to fruition, even at their old age.

Wole Soyinka then stressed that greed and corruption by this same set of people contributed to the current situation of the country. 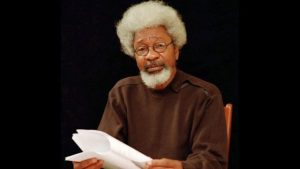 When the anchor, Zeinab Badawi, asked, “Has your generation of older Nigerians failed the people?”, his response was, “Yes, I believe so. I compare today with dreams and aspirations we had when we all rushed home after studies abroad. We considered ourselves the renaissance people that were going to lift the continent to world standards, competitors anywhere. It hasn’t happened.”

Addressing the problems of the 2019 Election, Wole Soyinka shared his struggles in choosing either of the main aspirants as both have both led the country at one time or the other in the past.

He said, “The 2019 election is one of the most depressing elections we’ve been through. Talking for myself, it wasn’t possible for me to make a choice for the simple reason that both candidates (President Muhammadu Buhari and Atiku Abubakar) had histories – one immediate, one past – which made one look for alternatives.”

Also, read: “You don’t have a monopoly of gutter language” – Dogara fires back at Tinubu over budget padding allegations

“We have excess doctors, nothing wrong if some leave the country” – Minister of Labour