By News Agency of Nigeria Last updated May 4, 2019

A popular fashion model, Ajak Deng, has taken to her social media handle to bemoan the vagueness surrounding the lives of models.

The south Sudanese lady could not hold her tears back as she lamented how she was tired of the fake life she has had to live.

Deng’s family had to relocate to Kakuma in Kenya, as a result of the civil war outbreak in South Sudan. There, they lived as refugees for three years, leaving her with no other choice than to struggle to be successful.

Now, after rising to the international stage in her career, Deng has stated how tiring the process had been, especially because she had had to deal with coaches who were negative all the time, and constantly made her feel terrible about herself. 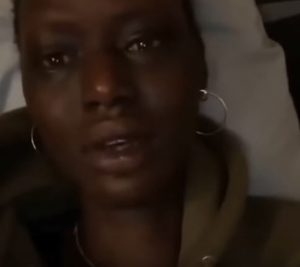 In the video, Deng made some statements which indicated she was already considering taking her own life while stating that those who she had been working with are to be blamed for her state of mind.

She said, “The people that work with you constantly tell you that you’re a horrible person. If I do commit suicide, know that it’s because of you.”

This is not the first time the model would make such statements online. In 2016, she made a post saying she would no longer be a model because of the same reasons she gave in the new video. But after a week, she was back on the runway again.

She wrote, “I am happy to announce that I am officially done with the fashion industry, I will be moving back to Australia in order to live the life I fully deserved. Which is real life. I can no longer deal with the fakes and the lies. My life is too short for this dramatic life.”

After Deng got into limelight in 2008, she has modeled on runways for brands such as Louis Vuitton, Marc Jacobs, Dior, Jean Paul Gaultier, Valentino, among others.

Abuja Raid: Nigerians On Twitter Rejoice As Yomi Shogunle Is Redeployed To Nkalagu

Despite my experiences, I’ll never discourage anyone from falling in love…