BMW released its new M series of cars, the M3 sedan, and M4 coupe. The new cars will go head-to-head with the likes of the Mercedes-AMG C63 and Audi Rs5 when they hit the roads later this year. Both cars sport an angular new aesthetic and a controversial gigantic kidney grille up front and the standard version of the cars come with a manual transmission.

And while neither vehicle has received a particularly profound upgrade, what’s new and the proven elements that have been left alone especially the option of 500 horses or manual transmission—are more than enough to make both extraordinary.

Adding to this, are the cars’ widened bodies, both of which feature sharper lines, added aerodynamic elements, and a more prominent rear diffuser than the 3 or 4 Series. 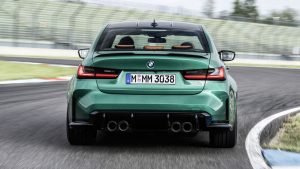 The standard M3 and M4 feature an upgraded S58 twin-turbocharged 3.0-liter inline-six capable of producing 473 horsepower and 406 lb-ft of torque. Meanwhile, the step-up M3 and M4 Competition feature a specially tuned version of that engine that can output 503 horses and 479 lb-ft of twist.

The Auto company claims the standard M3 and M4 can rocket from zero to 62 mph in 4.2 seconds, while the Competition model can do the same in just 3.9 seconds.

It also has a quiet button which many claim to be a loud button. In the cars, there are two settings for the engine sound. They vary both actual exhaust sound – by opening or closing flaps in the system at certain revs and throttle openings – but the louder setting augments it through the speakers. The engineers say most drivers will keep it loud. But select ‘quiet’ for early-morning starts or long trips.

The cylinder head also sports 3D printing. The M3 and M4 can be equipped with all the driver assistance of any other 3 or 4. That includes the little-known reversing assistant.

When you go into Reverse, you’re given the option to have the car’s steering take over and trace the exact same path in reverse as your last 50 meters going forward. So if you’ve driven a tricky course between walls and obstacles into a parking space, you know the car will get you out again. Provided the obstacles haven’t moved. Pedals remain your responsibility in all this. 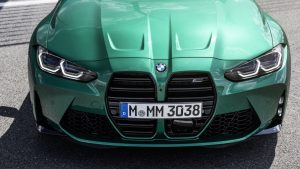 Hagen Franke, head of product management for the cars, confirmed that a convertible is on the way. BMW has also upgraded the M3 and M4 chassis to handle all that extra power. Both models also include an upgraded power steering system and an all-wheel-drive that will allow you to switch off the front axle should you want to have some fun.

The standard M3 and M4 also ride on forged wheels, 18-inch in front, 19-inch in back, while the Competition model’s wheels get a slight size boost to 19 and 20 inches respectively. There’s also an optional M Drive Professional package that includes a traction control system with 10 settings, a Drift Analyzer, and a lap timer. 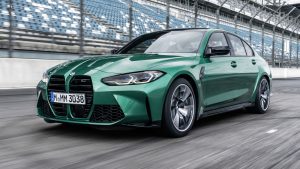 The interior of the M3 and M4 is pretty much like that of the 3 Series and 4 Series. No wood trim is available; only aluminum or carbon fiber. A 12.3-inch instrument display and 10.25-inch infotainment screen are standard equipment, as are sportier seats. BMW does offer a new set of optional carbon fiber power seats, which together will save an extra 21 pounds. They also have cutouts for racing harnesses. Some bold interior colors are available, too, such as Kyalami Orange in the M3, and Yas Marina Blue in the M4. 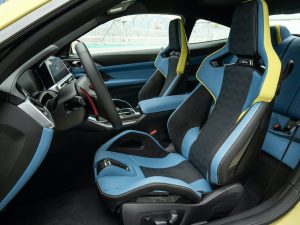 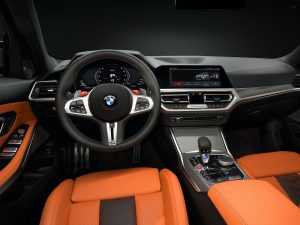 The M3 starts at $70,895, the M4 at $72,795. But a whole gaggle of options, like the $2,900 Competition package, can easily send the final price upward. The standard versions of both cars will go on sale next March, with the Competition models to follow in the summer.